The largest of Arkansas’s counties geographically, Union County was formed in 1829 from parts of Clark and Hempstead Counties. It originally encompassed what would later become Ouachita County, and the first county court was held at Ecore Fabre, now known as Camden. By 1843, El Dorado became the county seat.

It was between El Dorado and Lisbon that James C. Goodwin purchased a plantation after he and his family had migrated there from Jones County, Georgia. Though Goodwin died only three years after settling in Arkansas, his wife and children remained and became contributing members in the area.

The collections at SARA contain two ledgers from the stores of two of the Goodwins’ sons, William Harrison Goodwin and Elisha Hamilton Goodwin. William Goodwin received a degree in medicine from Tulane in 1867, practicing in Lisbon and later in El Dorado. The larger of the two ledgers is from the T. C. Chew Drug Company that William purchased an interest in, later buying out the interest of Chew. William ran the store for another twenty-two years until his death in 1906.

The smaller of the two ledgers relates to William’s older brother Elisha, who moved to neighboring Claiborne Parish, Louisiana in the late 1850s. Elisha also practiced as a druggist until the start of the Civil War. After the war, Elisha and his family returned to Union County where he engaged in farming until his death in 1901.

Research compiled by Goodwin descendants on the ledgers and the family’s history is also among the library collections at SARA. As always, donations of original materials are welcome.  For more information, please contact Archival Manager, Melissa Nesbitt, at melissa.nesbitt@arkansas.gov.

Northeast Arkansas Regional Archives (NEARA) is happy to announce that Erin Morgan will be the new summer intern! Morgan is a rising senior at Arkansas State University (ASU), majoring in history. Morgan previously worked at the ASU Museum.

One of the projects that she’ll be working on is rehousing the Barney Sellers photography collection, an extensive print and photographic negative collection that she’ll transfer to archival quality folders so that they can be enjoyed by patrons. In addition to processing and photographic materials handling, Morgan will also work and learn about digitization, metadata and the use of archival software.

The summer 2018 internship is made possible by the Lawrence County Historical Society and materials for the project are sponsored by the Arkansas Natural and Cultural Resources Council.

For current students who are interested in history, preservation or a related field, NEARA offers year-round internships. For more information about the program for the upcoming fall semester, please contact NEARA: northeast.archives@arkansas.gov or 870.878.6521.


For many, the period of Japanese American internment (1942-1945) during World War II is an event that is not closely associated with the Arkansas Delta, however southeast Arkansas was host to two internment camps: Rohwer and Jerome. In an effort to not lose the story of what occurred during this time, a coalition Arkansas organizations formed to educate the public about this significant event in American and Arkansas history.

In 2016, the Arkansas State Archives joined Rohwer Reconstructed: Interpreting Place Through Experience, a multi-phase collaborative project created by the Center for Advanced Spatial Technologies (CAST). The project began in 2013 as a way to build an online resource for researchers on Japanese American internment in the Rohwer camp, where nearly 12,000 people lived. According to the Rohwer Reconstructed website, the goal of the project is to tell an “abridged” story of the camp through documents, maps and visualizations presented in a technological framework.

Currently, about a third of the Rohwer Reconstructed’s materials come from the Archives’ collection, which include photographs, government documents, official correspondence, letters, personal effects and newspaper articles.

Dunn and Shurley have also had opportunities to share the Archives’ work and findings to the public, presenting at the 2017 Delta Symposium and the 2017 Connecting to Heritage Studies Consortium, both in Jonesboro, and in this past April’s Arkansas Historical Association Annual Conference in Fort Smith.

This August, Dunn  and Lah will present to a national audience at the Council of State Archivists, Society of American Archivists, and National Association of Government Archives and Records Administrators Joint Annual Meeting in Washington, D.C.

We will continue to update the public on the progress of the Archives’ work with Rohwer Reconstructed and with Dunn’s upcoming conference in D.C.

The First World War had an effect on communities across America, and Arkansas was no exception, as the war had a social and economic impact on our state.

Joining with the Department of Arkansas Heritage’s campaign to commemorate 100 years since World War I and to remember Arkansans’ efforts during the conflict, the Arkansas State Archives has launched “Arkansas in the Great War,” a three-part online exhibit chronicling the state during this period.

The exhibit was created through Google Arts & Exhibits and contains over 150 high resolution images of photographs, letters, government documents and maps that tell the story of Arkansas’s involvement in the war.

The first section, “Mobilizing the State for War,” profiles Arkansas before the U.S.’s entrance into the war and how the state mobilized to meet the challenge. Part two, “The War at Home,” examines the domestic impact the war had on Arkansans and explores the contributions of women and African Americans to the war effort. The last section, “In the Trenches,” details Arkansans serving in Europe and the events immediately following the end of the conflict.

Archival Assistant Brian Irby started the project over a year ago, initially as a book. However Irby changed it to an online exhibit when he saw that it would potentially reach more people. Becky Ballard worked with Irby on the exhibit, which included research, locating and digitizing materials, and writing descriptions.

Funding for the exhibit was supported by a Bridge Fund Endowment grant, a program created by the Arkansas Community Foundation that supports the teaching and promotion of Arkansas history.
Posted by Arkansas State Archives at 3:21 PM

In April 1927, Arkansas received record rainfall with over seven inches falling in Little Rock in just a few hours. The ground was already saturated, and flooding on the Mississippi River began affecting other rivers including the Arkansas. This flood cost Arkansas more in both human lives and property damage than any other state along the Mississippi River Valley. The flood effectively covered thirty-six of the seventy-five Arkansas counties in water up to thirty feet deep and covered 6,600 square miles. At the time, Little Rock's water supply came from the Arkansas River and was supplemented by wells in low lying areas of the city that were affected by the flood.


·         Day by day account of preparations for and remedial work performed because of the 1927 flood in Pulaski County 1927 April
Posted by Arkansas State Archives at 10:08 AM 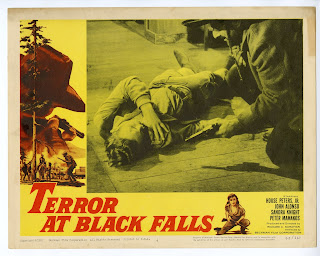 Terror at Black Falls was a small-budget western movie filmed in Scotland, Arkansas, in 1959. House Peters, Jr. starred as the sheriff, who was one of the main characters. He also starred in many roles in "B" western films with Roy Rogers and Gene Autry, as well as in a number of TV westerns. He also served as the model and live actor for the original "Mr. Clean." For many years, Mary Jean Hall of Scotland, Arkansas, corresponded with House Peters, Jr., and Gary Gray, who played the deputy in the original film. Mr. Peters and Mr. Gray returned to Scotland, Arkansas, in 1992, to commemorate the filming of the movie with the people in Van Buren County.

To find out more about the collection, please visit Terror at Black Falls finding aid on our website!

Posted by Arkansas State Archives at 8:37 AM