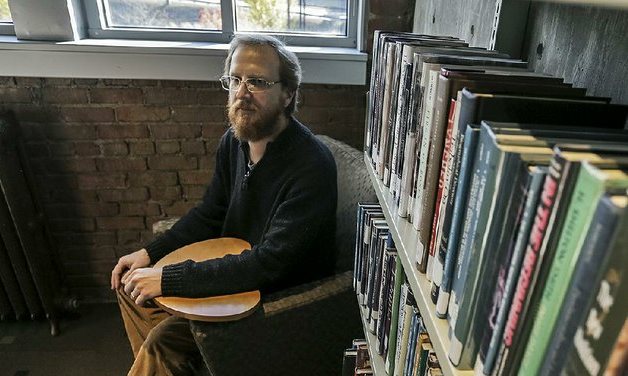 Next year marks 100 years since one of the worst violent events in Arkansas history, the Elaine Race Riot. Over the space of a few days, hundreds of African Americans were killed or injured, becoming one of the darkest days in the history of the state.

Writer and historian Guy Lancaster edited "The Elaine Massacre and Arkansas: A Century of Atrocity and Resistance, 1819-1919," a book containing a collection of articles that examine the history of race relations in Arkansas and what led to the events of 1919. The book, which was published in June, was funded in part by a Curtis Sykes grant.

“I wanted to broaden the story and show the larger context for what happened in Elaine,” Lancaster explains. “There is a lot of interest in the topic and I wanted to show through this book that there is an even larger story behind it than most people might consider.”

Lancaster is thankful for the Sykes Grant and the opportunities it brought. “It certainly made publishing the book a lot easier and we did not feel stressed when it came to the publishing budget,” said Lancaster. “It also helps keep the price of the book low enough that it might appeal to a larger audience.”

The Black History Commission of Arkansas is glad to have been involved in this important book and welcome others who might have African American history projects to apply for upcoming grants. For more information on grant guidelines, visit http://archives.arkansas.gov/about-us/bhca/curtishsykesmemorialgrantprogram.aspx.

Posted by Arkansas State Archives at 10:38 AM

On September 18, 1964, a small airplane circled a rural airport in the sleepy town of Walnut Ridge in northeastern Arkansas. As the plane landed, a few teenagers raced to the airfield to see what was afoot. What they saw left a lasting impression on them. Aboard the plane was the biggest rock n roll band in the world, The Beatles.

The Fab Four: John Lennon, Paul McCarthy, Ringo Starr and George Harrison, quickly exited the plane and boarded another plane en route for New York City, where they were playing one of their last stops on an historic tour of the United States. Realizing that the band would likely have to return to Walnut Ridge to change planes again, crowds of eager teenagers flocked to the airport for a chance to see the boys from Liverpool. The mass of restless youngsters were not unsatisfied as the band returned to the small hamlet.

In honor of the event, Walnut Ridge recently renamed one of its streets “Abbey Road,” a reference to the historic studio in which the band recorded its voluminous catalog of hits.

This is but one of the many stories that explores the musical history of Arkansas.

The program will feature three speakers who explore Arkansas's contributions to a genre of music. Dr. Marti Allen of the ASU Museum will discuss how rockabilly took root in the beer joints along Highway 67. Dr. Kenneth Carroll, assistant professor of saxophone and jazz studies at ASU, will examine how jazz developed as an art form in Arkansas. Dr. Alan Spurgeon, professor of music at the University of Mississippi, will delve into the legacy of folk music in the Ozarks.

We look forward to this exciting day of music!

Posted by Arkansas State Archives at 9:24 AM 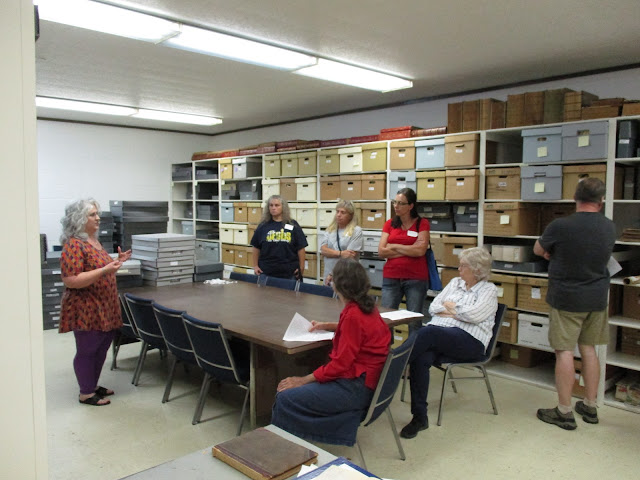 Participants in the Red River Heritage Symposium, held at Historic Washington State Park, toured the Southwest Arkansas Regional Archives (SARA) as part of their itinerary on Friday, July 20. This year’s symposium focused on the 200th anniversary of the formation of Hempstead County, which originally encompassed all of southwest Arkansas.

The SARA building originally served as an elementary school for the town of Washington, before the district went through its final consolidation with the Hope School District in the 1990s. Historic Washington State Park purchased the building in order to house its Collections Management Facility as well as provide a new location for SARA, which was previously located in one wing of the 1874 Courthouse.

The Hempstead County Historical Society founded SARA in 1978 and stationed it in Washington because it had served as the county seat of Hempstead County from 1824 until 1939. Though still located at Historic Washington State Park, SARA is now a branch of the Arkansas State Archives, a division of the Department of Arkansas Heritage.

SARA welcomes donations of original materials that focus on the twelve counties that were originally part of Hempstead County. For more information, please contact Archival Manager, Melissa Nesbitt, by email at southwest.archives@arkansas.gov, by phone 870-983-2633, or stop by at 201 Highway 195, Washington, Arkansas.

Posted by Arkansas State Archives at 9:14 AM 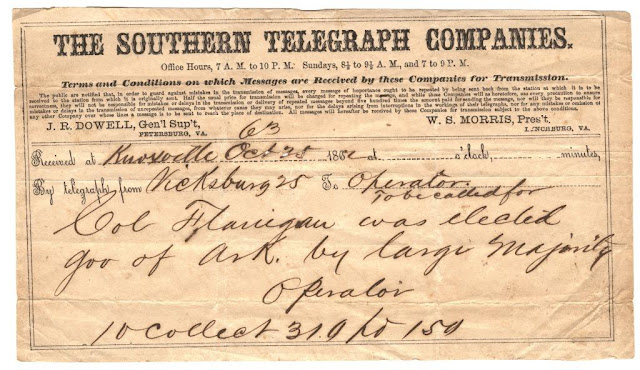 In this election year, most citizens will likely see or hear hundreds of political advertisements, and thousands of dollars will be spent in an effort to attract the support of voters. Remarkably, one of Arkansas’s governors was elected without even campaigning for the office. In 1862, during the Civil War, voters chose Harris Flanagin as the state’s governor as he served during some of the most tumultuous years in American history.

Flanagin was born in New Jersey in 1817. He moved first to Pennsylvania and then to Illinois before settling in the Clark County seat of Greenville in 1839 to begin practicing law. In 1841, he became a deputy sheriff, and in 1842 was elected to the Arkansas House of Representatives. He moved his law practice to Arkadelphia when it became the county seat of Clark County. He was elected to the Arkansas Senate a few years later.

Following the beginning of the Civil War and Arkansas’s secession from the Union in 1861, Flanagin joined the Confederate cause and saw a great deal of active service, including participation in battles at Wilson’s Creek and Pea Ridge. Arkansas’s new constitution provided for the election of a governor in 1862. Even though he continued to serve in the military and was out of the state with the Army of Tennessee at the time, Flanagin was elected, defeating incumbent Gov. Henry Rector. A telegram notified him of the election results.

Flanagin’s time at the helm of state government was not an easy one. Following the occupation of Little Rock by Union forces in September 1863, he moved state operations to Washington in southwest Arkansas. The war ended in 1865, and while he received a presidential pardon, he remained disfranchised for a number of years.

Eventually, the former governor became a member of Arkansas’s Constitutional Convention and helped craft the document that brought Reconstruction to a close in the state. While working on the new constitution in Little Rock, Flanagin became ill and returned to Arkadelphia. He died October 23, 1874, and was buried in Rose Hill Cemetery in Arkadelphia.

Tangible reminders of Flanagin’s significance in Arkansas history still remain. His law office stands across the street from the Clark County Court House: the building was added to the National Register of Historic Places in 1977. The original 1874 Arkansas Constitution that Flanagin helped prepare for the state continues to be used today. That original document is preserved by the Arkansas State Archives in Little Rock. To view the 1874 document and the state’s other constitutions visit http://ahc.digital-ar.org/.

Posted by Arkansas State Archives at 9:11 AM

Joycelene Duncan was born around 1923 in Guy, Faulkner County, Arkansas, to Minnie Pearl Quattlebaum and Sherman Duncan. Joycelence had two brothers, Alton Duncan and Jefferson Duncan, who fought in World War II and both are buried in the Little Rock National Cemetery. Her brother-in-law, Freeman Ray “Short” Bowman, who was married to Thelma Duncan, served in the Navy during World War II.

On Tuesday, August 21, the ASA is hosting its third Pen to Podium lecture of 2018 at the headquarters of the Department of Arkansas Heritage, 1100 North St., Little Rock. The event is sponsored by the Friends of the Arkansas State Archives.


Michael will be speaking about his book, "Rock Island Railroad in Arkansas."  The lecture will begin at 7:00.  There will be a short reception before the lecture beginning at 6:30, during which Michael will be selling and signing books.

Between now and then, be sure to check out Michael’s new podcast series featuring Rock Island history and interviews with former employees of the railroad at: http://hibblenradio.com/debuting-podcast-series-rock-islan…/

We hope you'll be able to join us on August 21!


Posted by Arkansas State Archives at 8:25 AM

Archibald Yell was an army officers, United State Representative, and the second Governor of Arkansas. He was born in North Carolina in 1797 to Moses and Mary Curry Yell, but grew up in Tennessee. Archibald served in the War of 1812 and fought at the Battle of New Orleans, reaching the rank of sergeant. He went on to serve during the First Seminole War as a first lieutenant. Yell married Mary Scott on November 8, 1821, in Tennessee. Mary Yell died in 1823 while giving birth to their daughter, Mary Scott Yell. In 1827, Yell married Nancy Jordon Moore, with whom he had four children: Artemesia, Jane, and Elizabeth, and Dewitt Clinton. While in Tennessee, Yell served in the state legislature and also practiced law. He served as Receiver of Public Monies in Little Rock, Arkansas. However, he resigned after he developed malaria and moved back to Tennessee to recover.
Yell returned to Arkansas in 1835, settling in Fayetteville, after receiving an appointment as a territorial circuit judge. His second wife, Nancy, died in October 1835.  Yell then married Mary Ficklin in July 1836. That same year, Yell became the first congressman from the State of Arkansas. He did not run for reelection due to the death of his third wife. In 1840, he successfully ran for Governor of Arkansas and served until his unexpected resignation in Spring 1844. Retirement was short-lived, with Yell entering the congressional election against his law partner, David Walker. Yell won the election and served until the outbreak of the Mexican War in 1846, when he resigned. He enrolled as a private under Captain Solon Borland, but was elected colonel. During the Battle of Buena Vista, Yell led a charge against the Mexican Army, received multiple wounds, and died on February 22, 1847.

This collection contains correspondence, a will, and news clippings related to the Yell family.
Posted by Arkansas State Archives at 9:12 AM