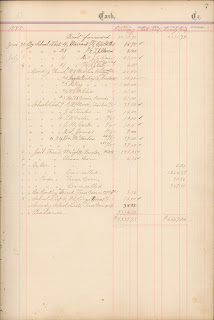 Named for American explorer Zebulon Pike, Pike County was created by the territorial legislature on November 1, 1833 from Clark and Hempstead Counties. It was not until 1836 that a permanent county seat was chosen when Murfreesborough (later changed to Murfreesboro) was established along with a post office.

The town is said to have been named by settlers who came from the town of the same name in Tennessee.  Due to two courthouse fires, most of Pike County’s early records are unavailable prior to 1895, thus making much of Pike County’s early history difficult to research. However, a ledger of the County Treasurer’s records that dates to 1884 survived the fires and has been preserved in SARA’s collections.

These records, which list county income and expenses, give a rare glimpse into Pike County history.  The columns record what was available in the treasury in currency, state scrip and county scrip. It also lists poll taxes collected and fees for teacher’s licenses, as well as payments for public school teacher’s salaries. With so much of Pike County’s early history lost, having such a record available is of great value to researchers.

Posted by Arkansas State Archives at 11:06 AM 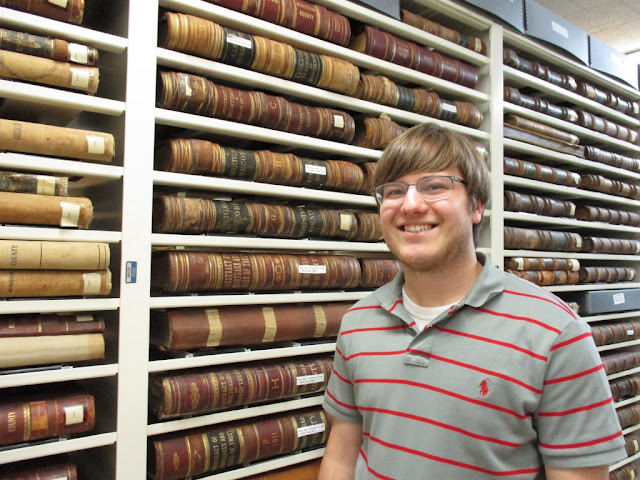 Wes Oliver, a rising senior at Ouachita Baptist University (OBU), has joined the team at Southwest Arkansas Regional Archives (SARA) as its summer intern. Oliver, who is double majoring in history and public history, and minoring in psychology, became familiar with SARA while touring with Dr. Wendy Richter’s Archival Studies course in December of 2017. Oliver became interested in the internship at SARA because he wanted to learn more about the work, but also to see if archiving is something that he would like to pursue as a career.

Oliver has kept busy with a variety of projects, which has given him an understanding of the work archivists do. A project that he has worked on is helping to organize over 400 courthouse ledgers on the custom ledger shelving that was installed at SARA earlier this year.  He is also helping with processing a collection of historical information on schools in southwest Arkansas which was compiled by former SARA Director Faith Riley.

One project in particular that Oliver has enjoyed is working on processing the unclaimed Hempstead County marriage licenses that were donated to SARA by former Archival Manager Peggy Lloyd. “Every preacher or justice of the peace had his own style of writing the records so that you could get a sense of the individuality of the people involved and some of the characteristics of the church denominations and local government institutions they represented,” said Oliver.

In his spare time, he enjoys reading (especially about history), walking his dog and exploring the outdoors.

The SARA Foundation sponsors the internship each year, and is the friends group for SARA.


Posted by Arkansas State Archives at 10:55 AM

The Black History Commission of Arkansas and ASA Host Workshop 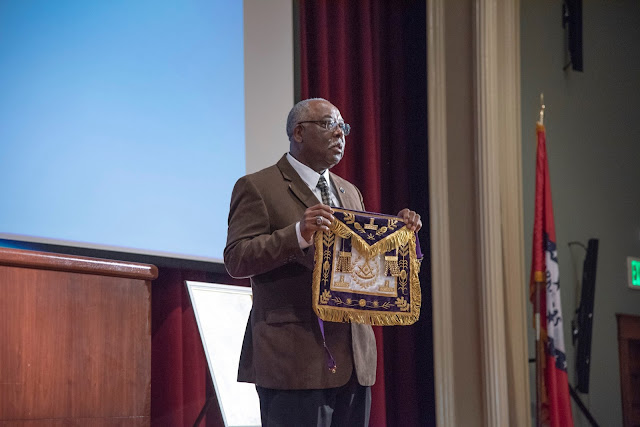 The Black History Commission of Arkansas (BHCA) and the Arkansas State Archives (ASA) hosted their annual workshop on Saturday, June 9, at the Mosaic Templars Cultural Center in Little Rock.

Tamela Tenpenny-Lewis wrapped up the day with a presentation about gravestones and the symbols that can be found on them. “There are countless stories hidden within the pages of the histories of the African American benevolent societies,” said Tenpenny-Lewis. “They speak to us from thousands of headstones in countless burial grounds. Some stand mightily in our midst today. Our awesome task is to find them.”


Posted by Arkansas State Archives at 9:19 AM

Sarah Starr was born December 30, 1848, and married Cory Rhodes October 20, 1866. They had six children, although only two survived to adulthood (Milton and Frances). By 1890, the Rhodes were living in Clarksville, Arkansas, and Cory was teaching Sunday School.
This collection contains the diaries of Sarah Starr Rhodes, which describe her day-to-day activities at home, the death of her father, and the birth of her last child, Frances. The establishment of Cumberland College in Clarksville, Arkansas, is frequently mentioned.
·         Diary 1890 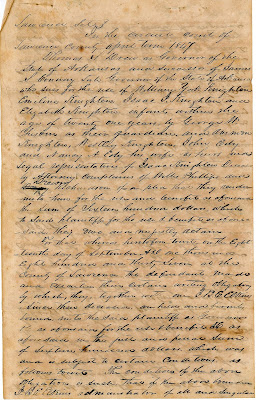 In early Arkansas, penal bonds were commonly posted for a variety of court-related functions. County officials, for example, had to post bonds swearing to uphold their office or forfeit the specified amount of money. Likewise, citizens who were fulfilling court obligations like the administrators of an estate also had to post a bond. These bonds were sworn to the Governor of Arkansas starting in 1819 with establishment of the Arkansas Territory. The practice continued once Arkansas reached statehood on June 15, 1836.

While it was rare, occasionally legal action was taken to make the individuals who posted a penal bond forfeit their payment. To do so, someone would have to allege that the bonded person did not fulfill the duties of the bond.

The case goes on to distribute the Knighten estate appropriately. In what may seem an ordinary document, the early history of Arkansas is captured and saved for Arkansans to discover 182 years later.

Posted by Arkansas State Archives at 10:20 AM 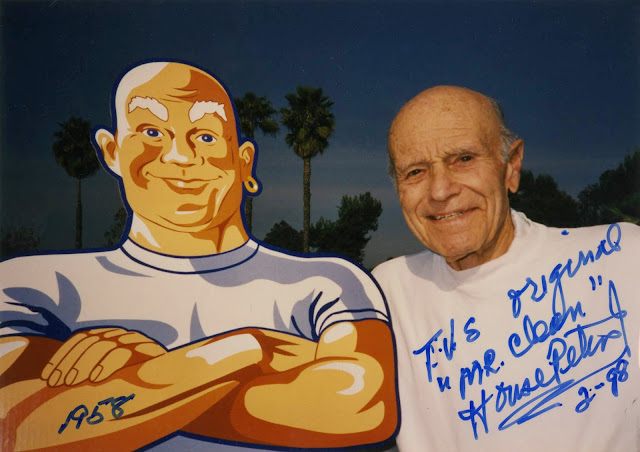 Arkansas isn’t known as a mecca for the film industry, but the state has produced a number of stars throughout its history: Billy Bob Thornton, Mary Steenburgen and Alan Ladd, to name a few, and has been the location for the filming of several movies, including “Mud,” “A Face in the Crowd,” “A Painted House,” “The Blue and the Gray” and “White Lightning.”

Arkansas also served as the location for a lesser-known western, “The Terror at Black Falls.” Richard Sarafian brought his self-penned western film to Arkansas in 1959. Sarafian had only worked in the industry for a few years, mostly as a television director, but he wanted to make a movie about vengeance in the Old West. His story focused on a young man who was lynched for horse theft, the subsequent revenge by the young man’s father, played by Peter Makamos, and the father’s demands to meet the town’s sheriff, played by House Peters.

Sarafian’s production company, Meridian Productions, had scouted the country for a suitable place that could double as the Old West, searching the Midwest and upper South until finally settling on the small town of Scotland in north-central Arkansas.

Scotland had a population of only 150 with a downtown area that, with some changes, could pass for a western town, so at the end of May 1959, film crews began the town’s transformation. All modern touches were hidden, gasoline pumps removed, and asbestos siding replaced with clapboard siding. The crew even brought in hay stacks to drape over modern appliances that could not be as easily removed and workers hung old-fashioned signs around town to add a little authenticity.

Although cast and crew hoped the movie would be a smash hit when it was released in 1962, it had a short run and few people saw it. Eventually, the film was lost and the copyright expired. Luckily, film historians discovered the movie and restored the film. Today it can be watched online at http://www.westernmania.com/watch.php?id=38#.WxgaYSBOmUk.

While none of the actors are widely known, Peters would become known for his face, if not for his name. The year before filming began on the movie, Peters’ agent asked him if he would like to become a pitchman in commercials. Peters wasn’t sure about doing it, but with the promise of an easy $100, he shaved his head and donned a golden earring. From that moment on, Peters was a magic genie named Mr. Clean, and would be known as such until his death in 2008.

Before Peters died, he had a long running correspondence with Scotland historian, Mary Jean Hall. Through their years of communication, he sent her material from the film and his career, including scripts, posters, stills and other memorabilia. Hall donated the material to the Arkansas State Archives (ASA) in 2017. The artifacts are a treasure trove for those who wish to study film production as the collection offers a rare glimpse of behind-the-scenes film-making.

Posted by Arkansas State Archives at 8:40 AM