Arkansas folk singers and songwriters have a long tradition of using American history to connect with audiences. Among Arkansas’s most famous folk singer-songwriters is Jimmy Driftwood, who traveled the U.S. with his homemade guitar in the early 1960s.

Some of Driftwood’s songs used little-known historical events. For example, the song, “He Had a Long Chain On,” tells the story of a boy who awakened to a stranger outside his window. The stranger looked sad and wore a long chain. In the song, the stranger refuses help removing the chain, saying “I guess we had best let it be.” He then walks into the wilderness dragging the chain behind him. 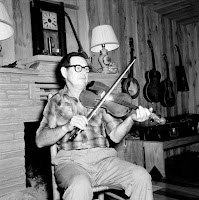 Driftwood said the song was about people who opposed joining sides during the Civil War. These men wanted nothing to do with the war, and many joined secret societies, called “peace societies,” for protection. Peace societies used elaborate hand gestures and verbal passwords to identify members. A member might say “It was a very dark night” and another would answer “Not as dark as it will be in the morning.”

Members of the societies used the passwords and gestures because they were targets.

In November 1861, Sam Leslie, a prominent citizen of Wiley’s Cove Township in Searcy County, wrote Gov. Henry Rector to complain about a peace society in his community. Rector then demanded society members be sent to Little Rock, “where they will be dealt with, as enemies of their country whose peace and safety is being endangered by their disloyal and treasonable acts.”

Confederate militias rounded up suspected peace society members across north-central Arkansas. Men were chained and marched for up to six days to Little Rock to stand trial for treason. Society members who didn’t escape were forced to enlist in the Confederate army or stand trial. Most enlisted and later deserted. Men who went to trial were acquitted and sent back home.

The marches are largely forgotten, but as a child, Driftwood’s parents told him stories about them. His mother told him the man with the long chain might come to visit if Driftwood misbehaved. Later, Driftwood incorporated those stories and histories into his music. As a school teacher, he wrote folk music to teach history to school children. Driftwood continued to teach, write, perform and support folk music in Arkansas for decades. When he died in 1998, he left behind a legacy of music that continues to captivate audiences and preserve history.

Posted by Arkansas State Archives at 10:37 AM