We are pleased to showcase our new collections! This month’s accessions include photos by Gustave Joseph Shrader, a 1920s Valentine’s Day postcard and a group photo of Arkansas Gov. Orval Faubus with U.S. President Harry S. Truman. 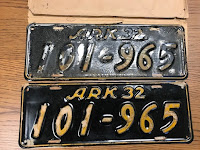 
The Archives and our library is open and available to the public from 8 a.m. to 4:30 p.m. Monday through Saturday at 1 Capitol Mall, Suite 215, in Little Rock. You can also donate material by visiting our website or by contacting Julienne Crawford, our collections services coordinator, at julienne.crawford@arkansas.gov.