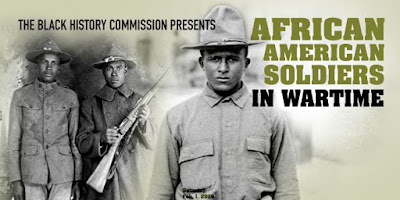 LITTLE ROCK –  The Black History Commission of Arkansas is pleased to present “African American Soldiers in Wartime,” a free, one-day symposium about the history of African Americans serving in U.S. wars. The symposium is co-sponsored by the Arkansas State Archives.

The symposium starts at 10 a.m. Saturday, Feb. 1, at the Mosaic Templars Cultural Center at 501 W. Ninth St. in Little Rock. Check-in begins at 9:15 a.m. Tickets are free and available at http://archives.arkansas.gov or via Facebook.

Speakers Dr. Cherisse Jones-Branch, a Persian Gulf War veteran, will present "A Debutante, a Soldier and a War Veteran," and Brig. Gen. Gracus K. Dunn, who retired from the U.S. Army, will present "African-American Services in America's Wars." The symposium will focus on the contributions of African American soldiers in American wars.

Jones-Branch is a military veteran and a professor of history at Arkansas State University. Her research interests include the history of Arkansas and issues related to race and gender, civil rights, rural history, women and African Americans. Jones-Branch, who is also a member of the Black History Commission of Arkansas, has accrued multiple honors and awards for her research, studies, mentoring and teaching. She is a fascinating public speaker who has published multiple books, including “Crossing the Line: Women’s Interracial Activism in South Carolina during and after World War II.” She is researching a project about the activism of rural black women in Arkansas between 1913 and 1965.

Dunn is a Little Rock native and graduate of Arkansas Tech University. He was commissioned as a transportation officer in the U.S. Army in 1982. His military education includes a Masters of Art in strategic studies from the Army War College.

Dunn has served in a variety of military assignments and operations, including two tours at the Pentagon in Washington, D.C.  He has served internationally and commanded soldiers from Company to General officer level during his career. Dunn, who retired in 2014, is a decorated veteran whose awards include the Army's Distinguished Service, Defense Superior Service and the Legion of Merit awards. He is a renowned public speaker and an expert on the history of African Americans in the military.

Teachers can earn up to three professional development credits by attending the symposium. The event is free but reservations must be made by Jan. 27. Refreshments will be provided.