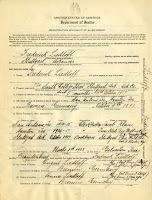 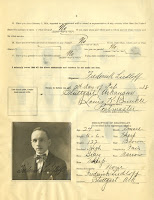 Researching your immigrant ancestors’ stories can be a long, drawn-out process. For many researchers, it helps to have a strong oral family history to use as a starting point. However, in some cases, such stories have been lost over time.

So, how do genealogists reconstruct immigration stories?

The key is to start with an individual’s life after coming to the United States. But, what if the immigration date, or the immigrant’s country of origin is not known?  This information can often be discovered by referring to the genealogist’s old standby – census records.

From 1850 to 1940, one of the key questions asked by the U.S. Census Bureau was: “Where were you born?” This question gives researchers a starting point, to discover countries of origin in the census data. From 1900 to 1930, the Census also asked, if an individual was naturalized (that is, being granted citizenship) and from 1910 to 1920, the Census included arrival dates.

Most importantly, these records can be used to find where the individual was living at a particular point in time. This clue can help researchers find documents at the local level.  Perhaps surprisingly, such documents can include naturalization. Before 1906, any municipal, county, state or federal court could grant U.S. citizenship. Even now, there exists no comprehensive, nationwide index for these early naturalizations.

For Arkansas, the earliest naturalization records date back to when the state was part of the Louisiana Territory in the early 1800s. The Arkansas Territory was formed in 1819 from the southern portion of Missouri Territory and became a state in 1836. Knowing where an individual lived, and when, will help narrow the choices of where to look for possible naturalization and immigration records.

Another helpful tip is to learn about U.S. immigration history and its process before diving into individual research. Immigration laws changed over time, so knowing the history of immigration will help you understand what documents existed and where those records may be kept.

In the U.S., citizenship historically has been a two-step process. Immigrants first completed and filed a declaration of intent, then completed a petition for naturalization. Those documents led to orders granting citizenship, which were generally approved five years or more after the filing of the declaration of intent. This may sound straightforward, but complications showed up in practice. An immigrant might file his or her declaration in one state, then finish the petition in another state, or another district within the same state. Records might not be kept in one location, and counties often did not create separate, dedicated registers or ledger books to record such documents. That means immigration documents can be found recorded in virtually any municipal, county, state or federal court record book.

No complete nationwide index for early naturalizations exists, but there was an attempt made in the 1930s to create one. It was the work of the Immigration and Naturalization Records Indexing Project, a service division for the Works Progress Administration. The project was ambitious but not complete. It covered the years 1810 to 1906 and listed every immigration document that its staff could find. The information was organized in three categories: counties with records; name of the book where documents were recorded or filed; and the page number of the record. This process created an index of record cards phonetically organized through the Soundex system; a searchable database of this resource is available through FamilySearch.org. The project covers immigration records up to the date that the federal government took over the naturalization process on Sept. 27, 1906, but be advised: Even then, it took lower courts time to stop approving naturalization documents.

The Arkansas State Archives holds many county records created before the Indexing Project. They include declarations of intent that reveal where the person came from and when they arrived in the U.S. The State Archives also has some petitions, which includes information about the petitioner’s family.

Records for after 1906 can be found on Ancestry.com, a research database the Arkansas State Archives offers for free at its Little Rock facility. Immigration records are also available at the National Archives. The U.S. Citizenship and Immigration Services may also have duplicate records, including certificates of citizenship granted from 1906 to 1956.

Other records may be available, including enemy alien registrations. Following the U.S. entry into WWI, non--naturalized individuals born in the Central Powers nations, including Germany, Turkey, Austria and Bulgaria, were required to register with the U.S. government as a national security measure. The information on these Enemy Alien Registration affidavits included: the non-naturalized resident’s name, date and place of birth, parents’ names and their birthplaces, parents’ residences, the resident’s place of residence, U.S. arrival date, spouse’s name and birthplace and maiden name, if applicable.

The Arkansas State Archives preserves many alien enemy registration affidavits from immigrants who had moved to eastern Arkansas. Alien registration records may also be found online at FamilySearch and the National Archives.

For more information about Arkansas history, visit archives.arkansas.gov. Although the Arkansas State Archives is closed to the public due to COVID-19, staff are still accepting research requests and answering questions. Research requests are available online or by calling 501-682-6900.


Posted by Arkansas State Archives at 10:51 AM