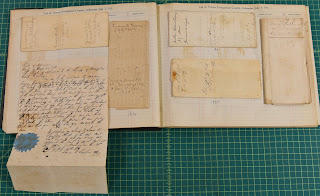 Recently, while working through an inventory of collection items at Historic Washington State Park, Curator Josh Williams discovered what might be thought of as an “orphan:” a venerable scrapbook, apparently undocumented. It lacked such identifying information as a deed of gift, an accession number, a donor’s name or donation date. This is the type of artifact that curators and archivists often term “found in collections”  because, well that’s strictly accurate. Such collections orphans can cause headaches because careful documentation of the origin and “provenance”—that is, chain of custody or ownership—of artifacts and archival materials is a foundation of this profession. Williams evaluated the scrapbook’s possible usefulness as an artifact for display versus its potential documentary value. Since it had never been accessioned into the park’s collections, he decided to transfer the scrapbook to SARA in order to make its contents more easily accessible for study. 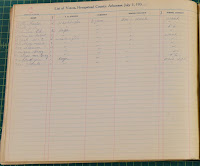 The backbone of the scrapbook was a ledger, originally used to record the names of eligible voters of Hempstead County — in short, those who had paid their poll taxes.  However, news clippings and miscellaneous loose 19th century Hempstead County court records were pasted over several pages of the voters’ names. A note on the front cover indicated it had made its way into the hands of Lucile Monroe Carrigan, a native of Washington, Arkansas. Had Carrigan been the one who re-purposed the ledger as a scrapbook of Hempstead County history? It is probable, and her intention was indicated by the note attached to the front cover which stated, “These documents are the property of Lucile M. Carrigan. Given to the Historical Records Survey to use as they see fit.” The Historical Records Survey was “organized in 1935 as part of the Federal Writers’ Project, to document resources for research in U.S. history,” and Carrigan worked for the HRS in Hempstead County.[1]

Hempstead County “loose” court records trickling back to SARA isn’t a new phenomenon. They’ve been resurfacing a little at a time for more than 40 years, and here is the backstory. 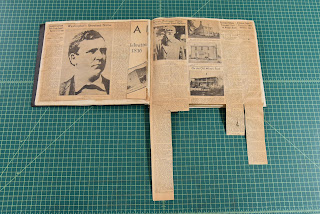 Washington became the county seat of Hempstead County in 1824. Two of the former court houses remain standing and are today owned and managed by Historic Washington State Park. The first was completed in 1836 and the second in 1874. After the conclusion of the Civil War in 1865, the railroads expanded into southwest Arkansas creating towns like Prescott, Hope and Texarkana. As the center of transportation shifted, so too the center of commerce relocated, which meant that Hope began to grow, and Washington began to decline. Thus, began a battle for the county seat that was finally decided in the late 1930s.

A new courthouse had been completed in Hope in 1939 as a project of the Public Works Administration (PWA), not to be confused with the Works Progress Administration (WPA). During the move into the new courthouse someone--possibly the county judge or county clerk or an employee--decided to discard the abundant 19th century miscellaneous loose court records. Several concerned and historically minded citizens collected these from the trash pile in no particular order and took them home for safekeeping. Decades later, after SARA’s establishment in the late 1970s, these same people began to donate the records to the archives.

This brings us back to the scrapbook’s usefulness to researchers. Court records often give answers to genealogical and historical mysteries that might not otherwise be solved when these records are lost. Hempstead County is fortunate in that its records are mostly intact. Some counties in Arkansas aren’t as fortunate due to damage from man-made and natural disasters, the ravages of war or neglect through poor storage facilities and practices. 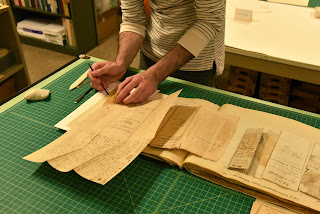 The scrapbook is currently at the Arkansas State Archives and is being evaluated by Hunter Foster, archival assistant for conservation. Archives staff are proceeding slowly and cautiously to see how best to preserve the scrapbook and the records it contains as well as the best plan for making the records available for research.

SARA is also fortunate to have the relationship with Historic Washington State Park. Besides providing a location for the archives and maintenance support for the building and grounds, the archives and park staff collaborate on projects like this one in order to better preserve Arkansas’s history and make it available to all.