We're starting a new bimonthly blog post.  Written by one of our archivists, Jeff Lewellen, this new blog post will focus on our music collection and Arkansas's music history.  We're calling this new section of our blog, Jeff's Corner.  Today, Jeff highlights Jimmy Driftwood's song, "The Battle of New Orleans." 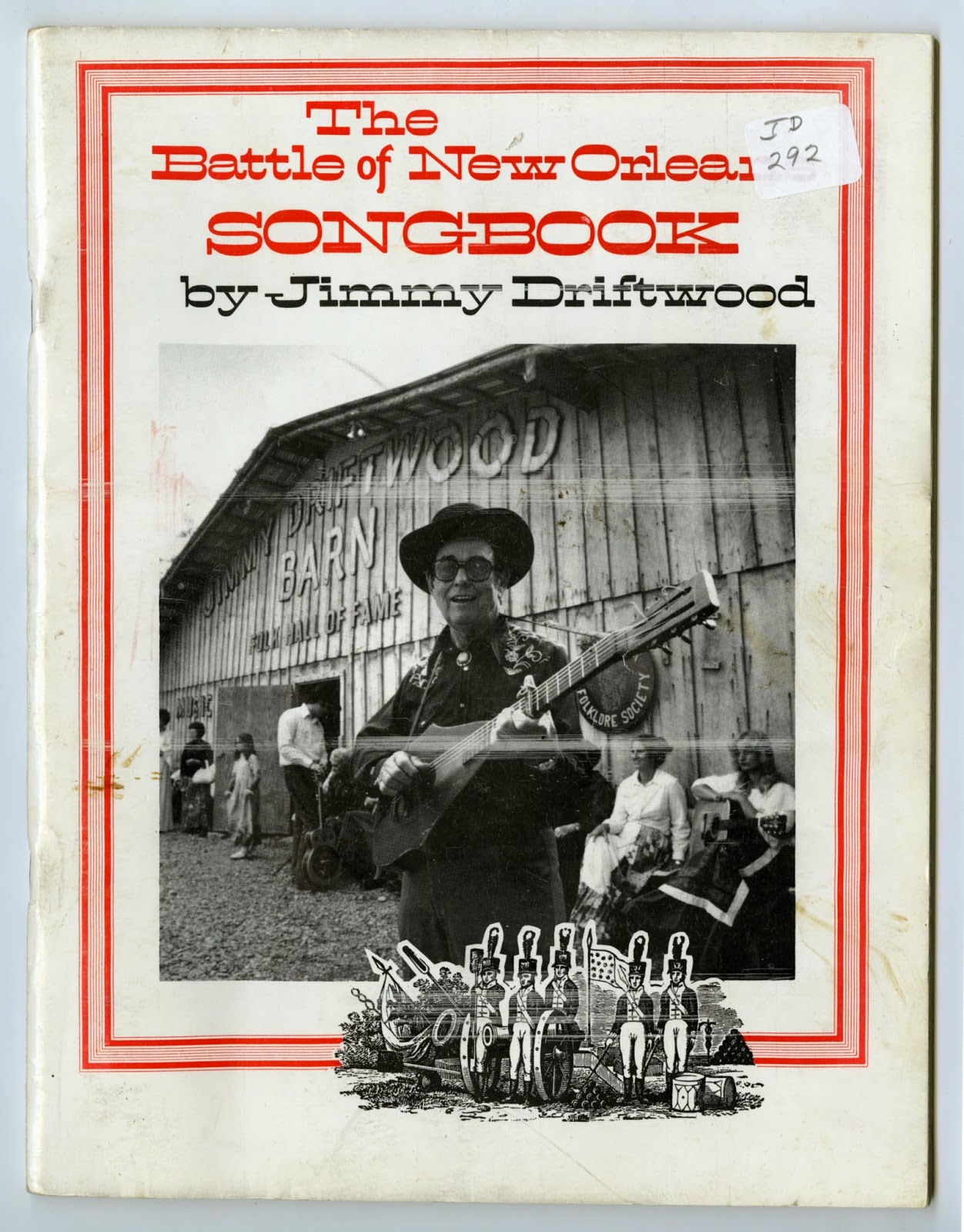 “In 1814 We Took A Little Trip…”
Jimmy Driftwood and the “Battle of New Orleans.”
Jimmy Driftwood played a significant role in the establishment of the Ozark Folk Center in Mountain View, Arkansas. Driftwood, born James Corbitt Morris in 1907 in Stone County, Arkansas, had enjoyed success as a song-writer and folk singer during the 1950s . His signature song, “Battle of New Orleans” became an international hit for the country singer Johnny Horton in 1959. Driftwood and Horton won the Grammy award for Song of the Year  in 1959. Jimmy Driftwood ran the music program at the Ozark Folk Center for the first several years of its existence. He would often serve as the MC of the weekend performances at the large performance auditorium on the Park grounds. On August 27, 1975, Jimmy Driftwood led the performance with his usual blend of stories and songs that made each of his performances unique, informative and unpredictable. On this night, he introduced his most famous song by explaining its origin.

“We believe I wrote this song in 1945 for my history students in Snowball, Arkansas. I was a school  teacher and I hope you don’t hold that against me. And I won the Grammy Award for this song. But all the songs on that first album were chosen by those kids. But afterwards, the experts stepped in and we never had the success we had with that first album.”

Driftwood took the melody from an old fiddle tune titled “8th of January,” which was written originally to commemorate the Battle of New Orleans. Driftwood added his color ful lyrics for this history students as a means to teach them about the War of 1812 and Andrew Jackson’s victory over the British in New Orleans. The rendition Driftwood sings this particular night includes much more of the colorful language and several lines of extra lyrics than the Johnny Horton single.

“Well, I seen Mars Jackson walkin’ down the street
And a-talkin’ with a pirate by the name of Jean Lafite.
He gave Jean a drink that he brung from Tennessee
And the pirate said he’d help us drive the English to the sea.”

“Well, the French told Andrew You better run
For Packingham’s a comin’ with a bullet in his gun.
Old Hickory said he don’t give a damn
He’s a gonna whip the britches off of Colonel Packinham.”

“Well, we’ll march back home but we’ll never be content
Till we make Old Hickory the people’s President.
And Every time we think about the bacon and the beans,
We’ll think about the fun we had way down in New Orleans.”

Driftwood was a song collector, or “Song-catcher,” just as many others in the Ozarks
Region such as Almeda Riddle. But he was also a singer-songwriter, much like Woody Guthie and Leadbelly before him. Driftwood took the elements of traditional folk music which normally have lyrics and melodies that go back so far, no one is certain of their origins, and  added his own unique lyrics.
The live recordings of performances at the Ozark Folk Center are part of the collection given to the Arkansas History Commission. They can be accessed and listened to onsite by contacting the Archivist On Duty in the Research Room.
Posted by Arkansas State Archives at 9:17 AM