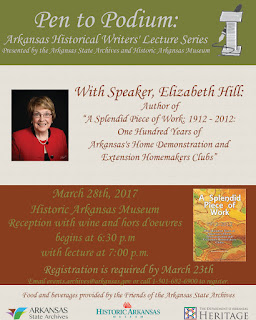 The Arkansas State Archives will hold the second lecture in its series, Pen to Podium: Arkansas Historical Writers’ Lecture Series, on Tues., Mar. 28 from 7 - 8 p.m. at Historic Arkansas Museum in Little Rock, Department of Arkansas Director Stacy Hurst announced today. Elizabeth Hill will present, A Splendid Piece of Work: Arkansas’s Early Home Demonstration Clubs in recognition of Women’s History Month. Before the lecture, a reception sponsored by the Friends of the Arkansas State Archives will begin at 6:30 p.m. in the atrium of the museum.

State Archives Director Dr. Lisa Speer noted that Hill’s work is based in part on research conducted on Home Demonstration Club scrapbooks held at the Arkansas State Archives. “I am delighted that Elizabeth Hill is the featured speaker for this lecture during Women’s History Month,” remarked Speer.  “Her work on the state’s home demonstration clubs is a thoughtful and well researched addition to scholarship on Arkansas women in the twentieth century.”

For more information or to register, contact events.archives@arkansas.gov or call 501-682-6900.
Posted by Arkansas State Archives at 10:26 AM


The Northeast Arkansas Regional Archives (NEARA) will be celebrating its sixth year anniversary with an open house from 10 a.m. until 2 p.m. on Fri., March 3, 2017, at the Male and Female Academy in Powhatan, announced Department of Arkansas Heritage Director Stacy Hurst.

The open house will feature presentations by staff members and past recipients of the NEARA award for historical scholarship and tours of the facility. Light refreshments will be served.

NEARA is a branch of the Arkansas State Archives. NEARA’s mission is to collect and preserve primary and secondary source materials pertaining to the history of northeast Arkansas. Its collections span a 16-county region dating back to 1806. The opening of NEARA in 2011 marked the return of the original Lawrence County court records to Powhatan from Arkansas State University, where they had been housed for several years.  These records constitute some of the earliest records on Arkansas, dating back to the early 19th century. Lawrence County was created in 1815 as part of Missouri Territory and was the second of five large counties in what became Arkansas Territory in 1819.

“Arkansas is fortunate to have these early territorial papers,” remarked State Archives Director Dr. Lisa Speer, “and we are grateful to the foresight of the Lawrence County Historical Society members who saved these historical records from destruction.” With the bicentennial of Arkansas Territory coming up in 2019, Speer noted that she expects these records and NEARA to receive increased attention and use.

On February 19, the Arkansas State Archives is launching an online digital collection of materials related to Japanese American internment camps in Arkansas, Department of Arkansas Heritage Director Stacy Hurst announced today. The launch coincides with the 75th anniversary of Executive Order 9066, which authorized the removal of people of Japanese ancestry from the west coast in February 1942 and led to the creation of internment camps across the interior of the country during World War II.

The collection, “You Fought Prejudice and Won: Japanese American Internment Camps in Arkansas,” contains over 750 documents and images from the State Archives, relating to the Rohwer and Jerome Relocation Centers in the Arkansas Delta.  The camps housed approximately 16,000 Japanese and Japanese-American citizens between 1942 and 1945.  Materials in the online collection include photographs, letters, official documents, newspaper articles, personal narratives and artwork from internees and camp officials.

These materials were digitized as second phase of a larger collaborative project, funded in part by a grant from the National Park Service.  The collaborative project, “Rohwer Reconstructed,” directed by the Center for Advanced Spatial Technologies at the University of Arkansas at Fayetteville, will feature materials from multiple Arkansas archival repositories, as well as 2D maps and a 3D reconstruction of the camp.  Phase one of the Rohwer Reconstructed project is slated for completion in March 2017, with phase two materials to be added over the course of the following year. The entire project is slated for completion in September 2018.

Dr. Lisa Speer, state historian and director of the Arkansas State Archives, says of the digital project, “This project to create greater public awareness of the plight of Japanese Americans and Japanese- born immigrants in the U.S. during the second World War is critical to helping us understand the experience of those who suddenly find themselves under suspicion by the country they have chosen to call home.”  “Hopefully, this digital collection has lessons we can learn from the past and apply to our future,” Speer noted.

James R. Turner was born on August 7, 1848, to William R. and Elizabeth F. Ewett Turner of Phillips County, Arkansas. He was a livery merchant for twenty-five years in Poplar Grove (Phillips County) and also served as postmaster for twenty years. He married Retta N. McCoy on February 2, 1868. They had several children including Robert N., Daisy, Eva, Templin, and Cavett. He served as Justice of the Peace for eight years, following in his father's footsteps. In 1869, he became a correspondent for the "Southern Shield" newspaper. After he lost everything in a fire, in 1895 he established "The Shield," a Helena newspaper. He was a member of the Knights of Honor, and he and Mrs. Turner were members of Knights and Ladies of Honor. He died June 9, 1936.

This collection contains invitations and programs of various social activities in and around Poplar Grove, Helena, and Marvell, Phillips County, Arkansas, including Knights of Honor and Knights and Ladies of Honor events that were attended by James R. Turner. There are also items related to President Theodore Roosevelt's visit to Little Rock in 1905. Other items in the collection include a Justice of the Peace commission for William Turner (James R. Turner's father) and a land grant issued to Walter and Sarah Burress.
Posted by Arkansas State Archives at 9:02 AM

The Arkansas State Archives is conducting a series of records retention and preservation workshops for state agencies. They will be conducted on the following dates:

The workshops will cover the current Arkansas general records retention schedule, how to maintain and preserve records, donation of records to the State Archives, and electronic records.


For more information or to register, please contact Danyelle McNeill at danyelle.mcneill@arkansas.gov.
Posted by Arkansas State Archives at 8:38 AM

The Arkansas History Commission will meet on the following dates and times this year:

The Black History Commission of Arkansas will tentatively meet on the following dates this year:

All meeting will be held in the Arkansas State Archives conference room, located on the 2nd floor of the Multi-Agency Complex at One Capitol Mall, Little Rock, Arkansas.  Meetings are open to the public.


The Black History Commission of Arkansas is an advisory body to the Arkansas State Archives charged with preserving the history of black Arkansans and promoting the teaching of black history in Arkansas’s schools.

The Black History Commission of Arkansas will hold a regular, quarterly meeting on Thurs., Feb. 9, 2017, at noon in the Arkansas State Archives conference room, located on the 2nd floor of the Multi-agency Complex at One Capitol Mall, Little Rock, Arkansas.  This meeting is open to the public.
The Black History Commission of Arkansas is an advisory body to the Arkansas State Archives charged with preserving the history of black Arkansans and promoting the teaching of black history in Arkansas’s schools.

The Arkansas State Archives is opening a new exhibit, "On the Fields and in the Trenches: Relics of the First World War," which features World War I artifacts held in the State Archives museum collection, Department of Arkansas Heritage Director Stacy Hurst announced.

The collection includes weaponry, medical equipment, medals, photographs, a uniform and a variety of military helmets from several countries.

“This exhibit commemorates the 100th anniversary of the United States entry into World War I,” says Archives Director Dr. Lisa K. Speer.  “Over 71,000 Arkansans served in the military during the ‘Great War’,” Speer noted, “and this exhibit provides a glimpse into the carnage and brutality of the war experienced by soldiers, medics and nurses on both sides of the conflict.”

Speer serves as a member of the Arkansas World War I Centennial Commemoration Committee, and the State Archives is among a number of museums that will host World War I exhibits in 2017.  The Arkansas State Archives has a large collection of artifacts related to the First World War acquired in the early decades of the twentieth century for a Great War Museum at the Arkansas State Capitol.  Many of these artifacts were picked up off the battlefields by Louis C. Gulley, an Arkansan working as a postmaster for the American Expeditionary Forces in Europe during the war. 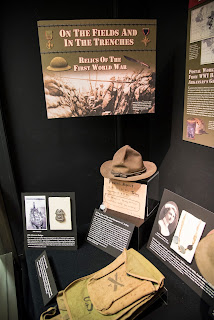 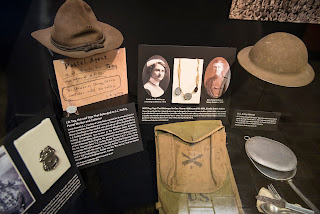 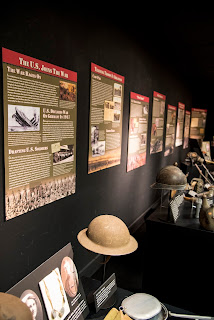 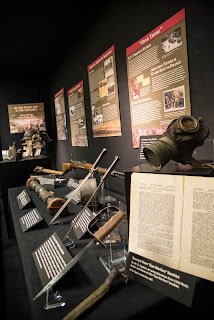 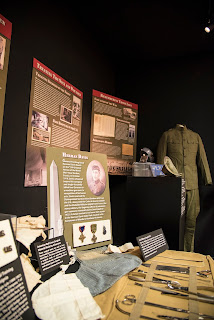 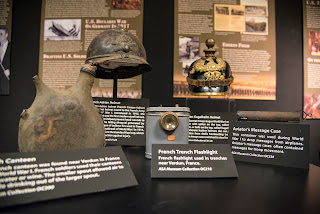