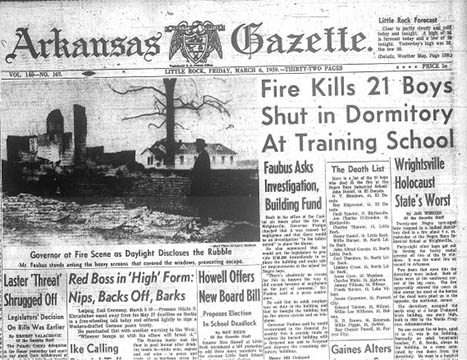 One way the Black History Commission of Arkansas promotes the history of black Arkansans is by administering the Curtis H. Sykes Memorial Grant, which funds preservation and public programming projects related to African American history.

The grant program is taking applications for projects, like one awarded last year to memorialize a forgotten, tragic fire that killed 21 children.

On May 5, 1959, a fire broke out in the boys’ dormitory at the Arkansas Negro Boys Industrial School in Wrightsville.  The “school” was actually a juvenile detention center holding 69 children whose low-level crimes ranged from petty theft to truancy. As the fire spread into the dormitory, the boys inside couldn’t get out because the doors were padlocked on the outside. Forty-eight children managed to escape by prying open windows, but the rest perished in the blaze. Their bodies were so badly burned they were unrecognizable.

Fourteen of the children were buried in an unmarked mass grave at the Haven of Rest Cemetery. There was no marker commemorate their deaths until Kwendeche, a local architect, and Constance Sarto, the first director of the Mosaic Templars Cultural Center, applied for a Curtis Sykes Grant last year helped fund one.

The commission approved their plan to erect a marker for the final resting place of children who were buried in the cemetery and awarded a $3,500 grant.  Additional funding for the marker came from the Friends of the Haven of Rest Cemetery.  The marker, which lists the names of the fire victims, was placed at the cemetery during a ceremony this past April 21. Families now have a place to come to mourn the loss of their loved ones.

Registration for workshops is required. Contact Tatyana Oyinloye, African American history program coordinator, at 501-682-6892 or tatyana.oyinloye@arkansas.gov to reserve a seat.
Deadline for this round of applications is Jan. 2.  To apply or for more information, visit http://archives.arkansas.gov/about-us/bhca/curtishsykesmemorialgrantprogram.aspx.

Posted by Arkansas State Archives at 10:00 AM