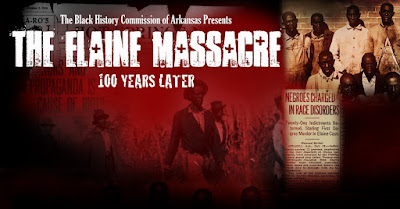 The Black History Commission of Arkansas, in conjunction with the Arkansas State Archives, will present a free, half-day symposium on the Elaine Massacre of 1919 from 9:45 a.m. to 1:30 p.m. Saturday, June 1, at the Mosaic Templars Cultural Center.

Check-in starts at 9:15 a.m. Teachers earn three professional development credits by attending. Tickets are available at http://archives.arkansas.gov or via Eventbrite at https://www.eventbrite.com/e/the-elaine-massacre-100-years-later-tickets-60087049984.

Special speakers Drs. Brian Mitchell, Cherisse Jones-Branch and Guy Lancaster will speak on the history of the massacre, its aftermath and ongoing influence. The Elaine Massacre is the deadliest racial confrontation in Arkansas history and among the bloodiest racial conflicts in the U.S. At least 200 black people were killed by white people over the course of several days in September 1919.

Dr. Brian Mitchell, professor of history at the University of Arkansas at Little Rock, will examine the lives of the Progressive Household Workers Union whose meetings for fair pay from white landowners rattled the white community. Mitchell’s discussion will include what happened to surviving African American union and community members in the wake of the massacre.

Dr. Cherisse Jones-Branch, a history professor at Arkansas State University and member of the Black History Commission, will speak about how women experienced the Elaine Massacre and on women’s individual and organizational activism on behalf of the men who were imprisoned after the massacre. Jones-Branch has been part of a collaborative project with the UA Little Rock Center for Arkansas History and Culture, local historians and community members to commemorate the 100 year anniversary. Her forthcoming manuscript, “Better Living By Their Own Bootstraps: Black Women’s Activism in Rural Arkansas, 1913-1965,” is under review for publication with the University of Arkansas Press.

Dr. Guy Lancaster will address the terminology used to describe what happened in Elaine and how these terms speak to different facets of the violence perpetrated against African Americans. Lancaster is the editor of the Encyclopedia of Arkansas History & Culture, a project of the Butler Center for Arkansas Studies at the Central Arkansas Library System. He also is an adjunct professor and freelance writer and has authored and edited multiple works on racial violence in Arkansas.

The Elaine Massacre started Sept. 30, 1919, when African American sharecroppers met to discuss better pay for their cotton. During a union meeting, shots were fired, sparking mass killings. Up to 1,000 white people from surrounding Arkansas counties and as far away as Tennessee traveled to Elaine to take part in the massacre. U.S. troops were eventually called in, and the white mob finally dispersed Oct. 2.
Afterward, more than 200 African Americans were put in jail or stockades, where there were reports of torture. A Phillips County grand jury charged 122 African Americans with crimes connected with the massacre, and a jury convicted 12 African American men of murder. The 12 men were sentenced to death but were eventually released after long court battles.

The Black History Commission of Arkansas, a board of the State Archives, seeks to raise awareness of the contributions and impact black Arkansans have had on the state’s history. For more information, contact Tatyana Oyinloye, African American program coordinator, at 501-682-6892 or tatyana.oyinloye@arkansas.gov.