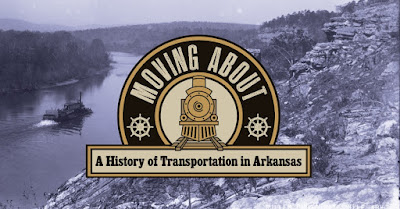 POWHATAN – The Northeast Arkansas Regional Archives will present “Moving About: The History of Transportation in Arkansas” during its annual symposium Saturday, Aug. 10, at Arkansas State University in Jonesboro.

"Various modes of transportation played a pivotal role in shaping the lives and livelihoods of people in the state of Arkansas," said Dr. Fatme Myuhtar-May, archival manager. "It is important to expose the public to that history. From flatboats to highways, our symposium will address how evolving modes of transportation and access to it changed our region and state."

Special speakers are: Robert Craig, an award-winning historian who will discuss the history of transportation on the White, Black and other rivers; Dr. Michael Dougan, a renowned history professor who will talk about the history of railroads and highways; and Joan L. Gould, a longtime preservation consultant who will focus on early footpaths and roadways.

Lunch will be served. The event is free, but seating is limited. Please make reservations by Aug. 5. Teachers can earn three professional development credits by attending.

How transportation changed over the centuries has greatly influenced all aspects of the development of Arkansas, from the state’s agriculture-based economy to immigration and the establishment of cities. The history of transportation has also affected families.

“Modern-day studies of early land routes across Arkansas has led to the identification of thousands of previously unrecognized men, women and children whose labors became the genius of the state’s present-day, world-famous agricultural industry,” Gould explained. “These families who first populated the state laid the foundation for the introduction of later technological advancements in transportation methods.”
Gould’s lecture will also include tips for genealogy research and information on the transformation of ancient footpaths by Native Americans, Euro-American and African American farmers.


Joan L. Gould, a graduate of the University of Nebraska, is owner of Preservation Matters, a preservation consulting business. Over the past three decades, Gould has provided historic research for preservation projects and National Register nominations in Arkansas and Missouri. Specific projects have included the Early Arkansas Settlement Studies I & II; the 1829 Izard County Territorial Courthouse, or Jacob Wolf House in Baxter County; the 1828 Rice-Upshaw House and the 1833 William Looney Tavern in Randolph County; and the early history of Lawrence County.

Robert Craig, who grew up in Newport, Ark., is an avid history researcher and writer. He has edited, written and published multiple historical articles and books on Independence and Jackson counties. His work has appeared in “The Stream of History,” a publication he edits for the Jackson County Historical Society, and the Central Arkansas Library System’s Encyclopedia of Arkansas. His research has earned him awards from the Arkansas Historical Association. Craig is finishing research on Jackson County during World War II, which includes information on the Army Air Field that was constructed in the county. He lives in Kennett, Mo.


Dr. Michael B. Dougan, of Neosho, Mo., is professor of history emeritus at Arkansas State University. He earned a bachelor's degree from Missouri State University, formerly named Southwest Missouri State College, and a doctorate from Emory University. He taught at Arkansas State University from 1970 to 2006. Dougan has published multiple articles and books on a wide range of historical Arkansas events over many time periods. His books include “Community Diaries: A History of State Newspapers” and “Confederate Arkansas: The People and Policies of a Frontier State in Wartime.” He authored “Arkansas Odyssey: The Saga of Arkansas from Prehistoric Times to Present” and has written many entries for The Encyclopedia of Arkansas. In 2017, he was the first recipient of the Five Rivers Historic Preservation’s Ransom Bettis Award in recognition of his research into Randolph County’s history.

The symposium will focus on Northeast Arkansas but will include information on other Arkansas regions and the state overall. For more information about the symposium, contact Fatme Myuhtar-May at 870-878-6521 or fatme.myuhtar.may@arkansas.gov. Make a reservation via Eventbrite.


Posted by Arkansas State Archives at 11:39 AM