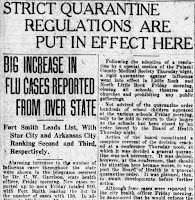 A hundred years ago, Arkansans found themselves in the grip of fear over a deadly influenza.

Beginning in 1918, a deadly flu hit worldwide and earned the name, “Spanish flu,” because people mistakenly thought it originated in Spain. The flu struck during World War I and decimated troops and civilians alike.

In the spring of 1920, Arkansans were nervous. Communities worked to combat any new outbreak and keep their residents safe. No one wanted to see a repeat of 1919.

Fort Smith, particularly, had reason to worry. Flu cases began to mount in the middle of January 1920, and while officials assured residents there was nothing to fear, simultaneously they were planning their strategy to deal with the epidemic. Dr. H.C. King, a local doctor, told a panel of physicians with the Arkansas Board of Health, “I believe in locking the stable before the horse is stolen. There may be no danger of the disease spreading alarmingly, but necessary precautions should be taken before the disease gets away from us.”

On Feb. 3, Fort Smith officials noted 119 new cases of the flu. The next day, officials announced 90 new cases. Overall, there were 335 new cases statewide on Feb. 4.

Greenwood in Sebastian County was especially hard hit. Greenwood’s health workers found themselves outpaced by the illness. Of the town’s two doctors, one contracted the flu while caring for Greenwood patients, leaving the other to deal with the mounting caseload. On Feb. 4, Greenwood Mayor John McCord sent Dr. C.W. Garrison, state health officer, an urgent request for nurses and doctors to care for the 200 cases in the town’s hospital. Doctors rushed to Greenwood to aid in the care for the sick.

On Thursday, Feb. 5, the Little Rock City Board of Health met to discuss the outbreak. The board thought imposing a citywide quarantine was unnecessary, but by the next morning, conditions had worsened. Statewide, there were 910 new cases of influenza. Fort Smith led the pack with 138 new cases. Star City had 125 new cases, and Arkansas City had 100 new cases.

Alarmed, Little Rock and North Little Rock officials placed the cities under quarantine. School systems, churches and all city theaters shut down. Stores and businesses could remain open only if they left their doors and windows open. Floor walkers in the store were ordered to make sure customers did not bunch up into groups. Customers were asked to move quickly, make their purchases and then leave.

Bible studies and indoor lectures were canceled. Streetcars could only operate if all the windows were left open. Children were discouraged from riding streetcars altogether.

Additionally, all houses with an influenza case had to be placarded to announce the infection to the public and discourage visitors. Any house that had a flu victim was required to notify public health officials within 24 hours or risk a $25 fine. Funerals were now private affairs open to the immediate family only.

Those seeking entertainment in Little Rock would search in vain because all the theaters and pool halls were closed. Instead, people took walks through the city. Main street was crowded with pedestrians, possibly violating social distancing laws.

Hotel operators were required to remove chairs from their lobbies to prevent people from congregating. Coach Earl Quigley of the Little Rock High School Tigers announced he was canceling the game between the Tigers and Pine Bluff High School and possibly the rest of the season.
Pine Bluff followed suit and established a strict quarantine. The city closed all public buildings except for grocers and meat markets. The city also made it illegal for a child to be on the street without a permit. More cities enacted quarantines Feb. 9.

Social life among college students at the University of Arkansas in Fayetteville ground to a stop. University officials banned student dating as well as any gatherings at soda fountains.

Meanwhile, Dr. Harrison Hale, a chemistry professor, thought chlorine gas could be a solution to kill the flu virus. He observed towns with chlorine gas factories seemed to have avoided flu outbreaks in 1919. Additionally, no students or professors in the chemistry department caught the disease.

Perhaps, chlorine was a good preventative against the flu, he thought. He invited students to come inhale 1/1000th of 1 percent of chorine solution daily for one week as part of his experiment. As many as 250 students signed up for the experiment.

By the time quarantines ended, the economic impact had already been felt across the state. Theaters in Little Rock, for example, lost an estimated $6,000 overall during the quarantine.

As Arkansans face a similar situation in 2020, it is interesting to look at the past. The lesson from 100 years ago is that sacrifice is necessary to keep communities safe. Quarantines and social distancing worked in 1920 to reduce the spread of the flu and the likelihood of death. Those measures, once again, will help keep Arkansas communities safe.