SARA honors the memory of founder and supporter

By Melissa Nesbitt, archival manager for the Southwest Arkansas Regional Archives
The Southwest Arkansas Regional Archives recently lost a dear friend, supporter and founder.
Mildred Johnson Smith passed away Oct. 11, 2020, after a long illness and is both fondly remembered and greatly missed by numerous friends and family. Smith was born in Washington in Hempstead County, Arkansas, in 1925. With a strong work ethic and a lifelong love of learning and history, she worked hard to gain knowledge for herself and to pass her love of learning on to others. Educated at Oak Grove School near Rosston,[1]she later attended AM&N, now the University of Arkansas at Pine Bluff, and Arkansas Baptist College in Little Rock. She earned her Master of Education from Jackson State University in Jackson, Mississippi, as well as a Specialist Degree in Education from Henderson State in Arkadelphia.

Prior to starting her career in education, Mrs. Smith worked in Little Rock at Ottenheimer Brothers, which became one of the largest women’s garment factories in America. The company made history in the 1940s by hiring African American workers during a time in which the workforce was diminished due to World War II.[2]Both fashion and beauty were great interests in Mrs. Smith’s life, and she also became a licensed cosmetologist as a graduate of Velvatex College of Beauty in Little Rock.

During the 1950s, she began her teaching career in the Little Rock and North Little Rock School Districts, in addition to being a devoted wife and mother of three children. By the early 1970s, Smith returned to her hometown of Washington and continued to teach in the Hope School District and eventually in Washington. She served as principal and subsequently the first black female school superintendent of the Washington School District. Not only was she a groundbreaker in the education field, she also actively engaged in politics, where she was the first black female Democratic delegate in the area.

Amid the fervor of the celebration of the United States Bicentennial in the mid-1970s, Hempstead County residents reflected on their role in the nation’s celebration. The Washington (Arkansas) Bicentennial Committee formed, and committee members decided to purchase research books for a local library. The Hempstead County Historical Society also formed during this time, and Smith became an active volunteer. She initially sought the advice of Arkansas History Commission Director Dr. John Ferguson about starting a library. Instead, Ferguson encouraged her to think even bigger: Why not start a regional archive?

Smith took Ferguson’s suggestion to heart; she served as a founding board member of the Southwest Arkansas Regional Archives (SARA) when it opened in 1978. It was a project of the Hempstead County Historical Society which had support from the Arkansas History Commission (now the Arkansas State Archives), Historic Washington State Park and the Pioneer Washington Restoration Foundation, along with a board of directors made up of members from its 12-county focus area. Part of the 1874 Court House at the state park housed SARA until the early 1990s when the archives were relocated to the former Washington Elementary School where Smith had taught.[3] 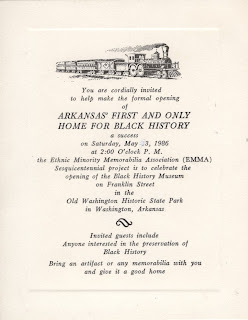 In addition to SARA, Smith founded the Black History Museum in Washington, which opened in 1986. As a teacher, she wanted her students to know about the role African Americans played in the history of her hometown and to give her students a sense of pride in their heritage. In recent years, illness forced Mrs. Smith to shutter the museum. The building and its sign remain, though, as reminders that three are many Washington stories yet to be told. Mildred Smith accomplished many things during her life; the Southwest Arkansas Regional Archives owes much to her vision. Our condolences go to her family, even as we celebrate her legacy and the example she set of working to preserve what otherwise might have been lost.