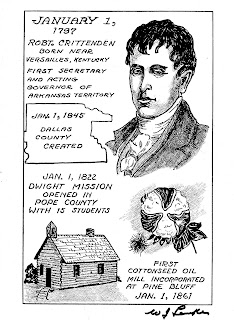 “Once a teacher, always a teacher” is a well-worn saying, a truism that, happily, has a core of truth to it.

The best teachers—at any level--both know their subject material and constantly look for ways to reach their students, whether in a classroom, in presentations or through publications.   This last category includes works ranging from dense, scholarly tomes to accessible, popular treatments.  In the middle of the last century, a respected Arkansas academic turned his hand to interpreting Arkansas’s past for the general public. His project created not a staid conventional history book, but instead an enjoyable graphic series, published in the state’s newspapers for all to read and enjoy, and today preserved in the Arkansas State Archives.

Walter J. Lemke (1891-1968) was born in Wausau, Wisconsin, and moved to Arkansas when recruited by University of Arkansas President John C. Futrall. Lemke served as head of the Journalism Department at the University of Arkansas from 1928 until his retirement in 1959. During his time in Arkansas, Lemke adopted the culture of the state, involving himself in historical study and educating audiences. He was active in several heritage organizations, including the Arkansas Historical Association, serving on its editorial board; the Arkansas Genealogical Society; the Washington County Historical Society, in which he served as president; the Prairie Grove Battlefield Development; and the Butterfield Overland Mail Centennial Celebration.

The Walter J. Lemke collection (MS.000379) at the Arkansas State Archives includes 447 drawings, each one created by self-taught artist Lemke, depicting figures and episodes from Arkansas history. 366 of these, one for each day of the leap year, were published in select Arkansas newspapers in 1936 in honor of the Arkansas State Centennial. Featured first under the title of “This Day in Arkansas History” and published again in 1938, restyled “Arkansas Anniversaries,” these daily drawings offer a wide sampling of early Arkansas people and events.

Lemke’s 366 daily drawings provide a quick and fun entry into Arkansas studies, accessible and suitable for adults and children alike. These black and white sketches provide visuals of early Arkansas activities and have been known to spark additional research from viewers. The “cast of characters” is diverse, including authors, educators, early territorial and state politicians, historians, lawyers, mailmen, martyrs, newspaper editors, religious representatives and war heroes. The illustrations feature early travel by hoof, rail, air, and boat. The growth of rural and metropolitan areas is illustrated by sketches of county courthouses and school buildings, some of which still endure.

The sketches take note of natural wonders in the land and sky; one panel commemorates a great display of falling stars. Another reports a meteorite that landed in Arkansas soil. Readers are reminded of natural disasters in the form of earthquakes, tornadoes, and floods; of how edible and otherwise useful crops grew in abundance; and of wealth-building discoveries of natural resources including oil, bauxite, and diamonds.

The illustrations feature stories of struggle and change; Lemke reminds readers of the work of modern Arkansans’ forebears, primarily Euroamerican; Native Americans are present in some episodes but African Americans, enslaved or free, are largely absent from Lemke’s narrative. Images recount tales of epidemics and battles, innovations and disasters, occasional lawlessness, justice, and woman suffrage. Lemke presented Arkansas’s history as episodes part of a social evolution, from undeveloped border country to a modern state with a diversified economy and bright prospects.

Lemke’s daily drawings are freely available for viewing at https://digitalheritage.arkansas.gov/lemke-drawings-dailies/. Lemke’s other 81 Arkansas images, published in 1937, under the title of “Men Who Made Arkansas History”, are also available online at https://digitalheritage.arkansas.gov/lemke-drawings-bios/. We encourage educators to use these illustrations as classroom aids or even coloring sheets.

Once on our Arkansas Digital Archives site, browse around—the website holds hundreds of thousands of Arkansas resources from the Arkansas State Archives. The content is diverse and ever-increasing!

Posted by Arkansas State Archives at 11:14 AM