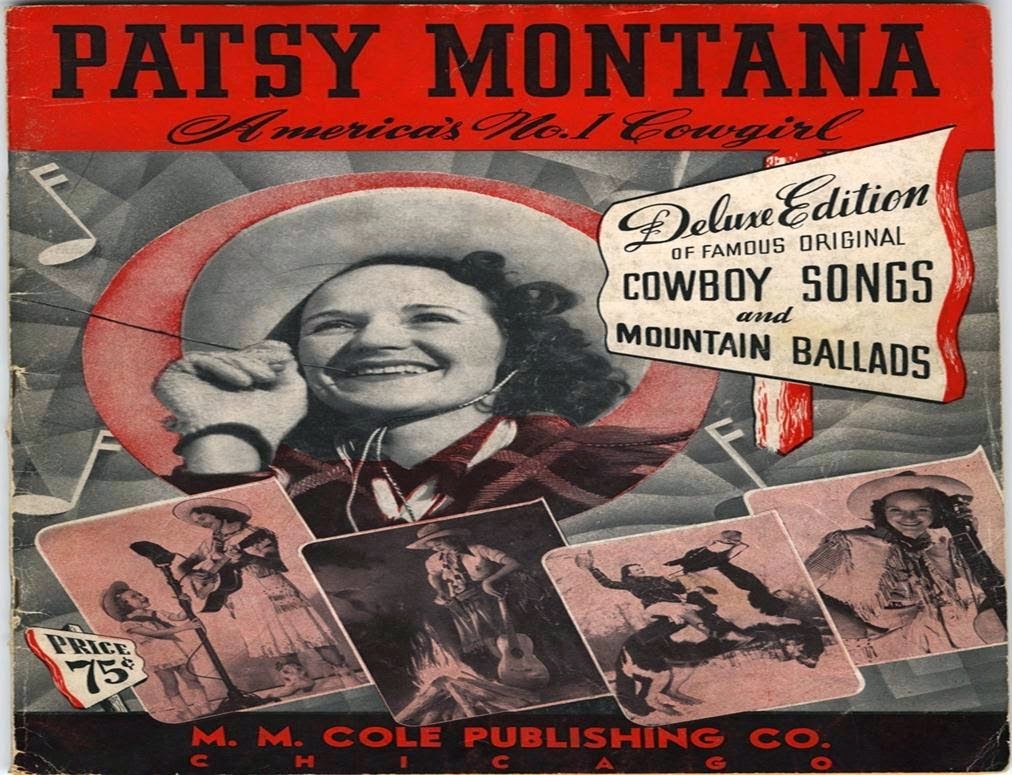 Patsy Montana:  “I Want to Be a Cowboy’s Sweetheart.”
Born, October 30,1908, Jessieville, Arkansas
Died, May 3, 1996, California.
“I Wanna Be A Cowboy’s Sweetheart,” released in 1935.
The Patsy Montana Tribute Concert took place in 1986 at the auditorium of the Ozark Folk Center in Mountain View, Arkansas. The Folk Center often dedicated whole programs and performances to Western folk music, gathering cowboy and cowgirl singers from around the nation to celebrate this unique music form. The audio recording of the concert and question and answer period with Bill McNeil are available at the Arkansas History Commission. We also have recorded versions of the 1935 original “I Want to Be a Cowboy’s Sweetheart,” in our audio collections.

Western or Cowboy music is a form of folk music that is often not the first thing that comes to mind with most people. The image of singing cowboys on the old movie serials or cowboy movies makes it seem like this form of music was all show business and Hollywood fluff. In reality, the western cowboy songs track back in history as far back as the original cattle ranchers and cattle drives. Cowboys literally got lonely out there on the plain, and simple work songs and ballads played on simple guitars and harmonicas made the time pass a little easier. Along with vivid storytelling of the cowboy life, yodeling played a major role in their songs. Glenn Ohrlin, of Mountain View,  is one of the best examples left of this tradition on the male side. On the female side, one of the first recorded artists in the “cowgirl” tradition was a native of Arkansas named Patsy Montana.
Born Ruby Blevins of Jessieville, Arkansas, she changed her name to Patsy Montana after she moved to California to record in the 1930s. Unlike many singers of her time, Patsy wrote many of her own songs. It is estimated that she wrote around 200 original songs, and as can be seen when you view her songbook featured in the photo of this article, most of the sheet music has her name as the sole author or co-writer of most of the songs.
“Most of my growing up years were spent in Hope, Arkansas,” Patsy told the audience after her 1986 performance at the Folk Center. She related how she learned how to yodel from listening to Jimmie Rodgers records on the Victrola. Patsy remembered her mother calling yodeling “hollerin’” even as her daughter actually became quite good at it. Out of high school and “wanting to set the world on fire,” Patsy moved west with one of her ten brothers to try her hand at music. Originally Patsy played the violin, but recalled that one of her brothers “brought in a guitar and I got me a little instruction book and won a talent contest in a local theater.” One of the local radio stations encouraged her to join with two other girls to work with a famous trick rope specialist known as Monte Montana.  Thereafter, Ruby Blevins became Patsy Montana. Her next move was to Chicago where she performed with the Prairie Ramblers for 15 years at WLS radio. Patsy became known for her yodeling.  Reflecting on this trademark years later she quipped, “I suppose if I had done ‘Nearer My God to Thee,’ I would have had to yodel on it.”
Patsy’s first recordings were in New York for RCA Victor where she sang and played violin with   Jimmie Davis, who would later write and record, “You Are My Sunshine.” The first tracks featuring her lead voice were “Don’t you love your Daddy, Too,” and “When the Flowers of Montana are Blooming.” But it was in 1935 that she wrote and recorded her most famous and successful song, “I Want to Be a Cowboy’s Sweetheart.” It went on to be the first female song to sell a million copies for country music, and is now considered a country classic.  At her 1986 performance, Patsy remained as vibrant and musical as she had been in her younger days. “You know, youth is such a wonderful thing. When you got it, you don’t know what to do with it, and when you learn what to do with it you ain’t got it no more.”
She introduced “Cowboy’s Sweetheart” with her typical humor: “I been singing everybody else’s hits up to now. I’d like to sing a medley of my hits. It won’t take about a minute and a half. This song’s been very good to me. It helped me pay the bills, too.”
Ruby Blevins (Patsy Montana) passed away on May 3, 1996, in San Jacinto, California.

Posted by Arkansas State Archives at 7:57 AM