In recognition of October’s designation as American Archives Month, Gov. Asa Hutchinson has for a second year proclaimed October to also be Arkansas Archives Month.

On Wed., Sept. 21, 2016, Gov. Asa Hutchinson issued a proclamation to the Arkansas State Archives declaring October to be Arkansas Archives Month.  In the proclamation, Gov. Hutchinson declares that "Arkansas Archives Month celebrates the significance of Arkansas's historical records, illuminates the many ways these records enrich our lives, and recognizes those who maintain them.” He “encourages his fellow citizens to discover the abundance of documentary treasures contained in our State’s archival repositories.”

American Archives Month is observed annually during the month of October by archival institutions around the country. Archives Month was created with the purpose of raising awareness about the importance of archives and the work of archivists.

Arkansas Archives Month celebrates the importance of the state’s historical records and recognizes the work done by those who maintain these records.  This year, as part of the observance, the Arkansas State Archives has created an Archives Month poster and is hosting a symposium, “Using Archival Records to Preserve Historic Structures,” on Oct. 29th featuring research methods for historic preservation of Arkansas homes and buildings.

The Arkansas State Archives is an agency under the Department of Arkansas Heritage and is responsible for collecting and maintaining the largest collection of historical materials on Arkansas in the world.  The State Archives has two branch locations; the Northeast Arkansas Regional Archives is located in Powhatan and the Southwest Arkansas Regional Archives is located in Washington. Other agencies under the Department of Arkansas Heritage include the Arkansas Historic Preservation Program, the Arkansas Arts Council, the Delta Cultural Center in Helena, the Old State House Museum, the Arkansas Natural Heritage Commission, the Mosaic Templars Cultural Center, and the Historic Arkansas Museum.

“Using Archival Records to Preserve Historic Structures” is funded in part by a grant from the Arkansas Humanities Council and the National Endowment for the Humanities. 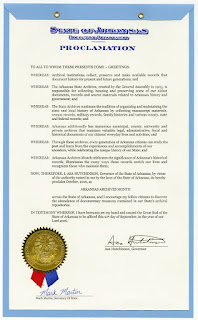