Arkansas’s historical role in developing scientific land management techniques is in the limelight after workers recently restored the historic Dam at Lake Bennett. The lake at Woolly State Park, near Greenbrier, is unique among Arkansas’s parks because it is the first in North America built to study water runoff and soil and silt erosion inside a specific watershed.

“People may not realize how rich and varied Arkansas’s heritage really is. In fact, we contribute to a wide range of scientific, cultural and economic developments nationwide — that includes the development of land management techniques used across the U.S. today,” said Stacy Hurst, director of the Department of Arkansas Heritage.

The dam was built in 1935 by the Civilian Conservation Corps and the Works Progress Administration. Lake Bennett was named after Dr. Hugh Bennett, who was the first director of the U.S. Soil Conservation Service. Bennett oversaw the lake’s soil erosion studies, which led to terracing, crop rotation, strip cropping and scientific planting of vegetation and trees — techniques still used today.

The dam was damaged during a flood in 2017, and the U.S. Department of Agriculture (USDA) spent about $300,000 to restore it, according to USDA’s Natural Resources Conservation Service. The project included rebuilding the back slope of the dam with rock riprap and drain-fill along the masonry wall.

The dam and lake are not on the National Registry of Historic Places, but they remain a vital reminder of Arkansas’s history. The state took over the property from Faulkner County in 1972 because of the land’s intrinsic, historic value. Now, Lake Bennett, with its sandy beach and clear water, is a popular park attraction.

The Arkansas Department of Parks and Tourism and USDA plan to hold a media event at 10:30 a.m. Thursday, Nov. 1, to discuss the dam, its history and cultural significance and to highlight USDA’s Emergency Watershed Protection Program, which funded the dam’s repairs. 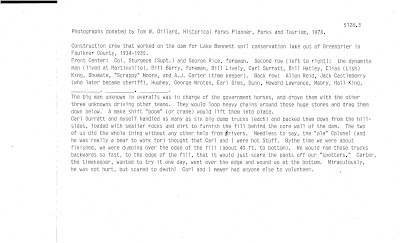 Posted by Arkansas State Archives at 12:30 AM