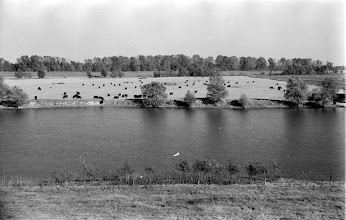 In 1866, Texas cattlemen herding their cattle into Missouri and Kansas found themselves under scrutiny. Missouri and Kansas cattlemen complained that the Texas cattle brought with them a disease they called Texas Fever. The disease was mysterious, with no known cause, but it was devastating to the cattle herds, spreading quickly and proving to be fatal to most infected animals. By the middle 1880s, some scientists believed that the disease was caused by a parasite found in the blood of infected cattle. Others speculated that the disease was the result of cattle eating garbage while being transported to farms. In 1892, researchers made another discovery: The parasite was transmitted from cow to cow by ticks. The disease’s scientific name was bovine babesiosis. The parasite attacked the red blood cells of cattle, causing anemia, fever, and then death.

Veterinary scientists noted that the major outbreaks could be found along most train routes that ran from the southern United States into the Midwest. Other than disinfecting the train cars and removing infected cattle from common grazing areas, they were at a loss as to how to curb the spread of the disease. Treatments for infected cattle often included quinine or a mixture of digitalis and whiskey, but they were rarely successful. In 1906 alone, the United States Department of Agriculture estimated that over four and a half million cows were infected east of the Mississippi, with another eleven million infections west of the river. The cost to the cattle industry was estimated by the Bureau of Animal Industry (an agency of the U.S. Department of Agriculture) to be around $40,000,000 annually.

Strangely, observers noted that Texas Fever was more prevalent in areas where fewer ticks were found, instead of in areas overrun with them. This meant that in areas with a higher number of ticks, the cattle had already been infected and recovered, giving them immunity to Texas Fever. Additionally, veterinary experts also discovered that most southern cattle had likely been exposed to Texas Fever as calves and were now immune. Unfortunately, cattle in the north part of the state and into the Midwest had not had the disease and were susceptible to catching it from ticks transported with southern cattle. This led the federal agricultural department to designate a quarantine of southern cattle below the Missouri state line. For Arkansas cattle growers, this meant that it was difficult to sell their cattle north to the lucrative beef markets in the upper Midwest, a circumstance that cost them thousands of dollars a year.

In 1891, the federal government took action to prevent the spread of the disease. The United States Department of Agriculture established a quarantine zone that stretched from the southern border of Kansas to Virginia. The new law prevented cattle from being shipped north via train unless it was for immediate slaughter. There were exceptions to the law, however. Cattle that bore a certificate that they had been dipped and were tick free might be transferred north without any restrictions. In Arkansas, the state government also established quarantines to protect areas of the state. One such quarantine line was created along the state’s western border to prevent cattle from Indian Territory (present day Oklahoma) from entering the state.

Because of the difficulty in keeping infected cattle from slipping through the quarantine lines, officials with the state Department of Agriculture argued that the only real effective means of ending the problem was to establish a tick eradication program. In July 1906, agents began a state program to eradicate ticks in Arkansas. As part of this program, agents from the Bureau of Animal Industry began holding educational meetings for cattle growers around Arkansas. They explained that the tick was the real menace and discussed methods to eradicate the ticks from cattle. As they traveled the state, they also inspected the local cattle. They found that of the 7,474 cows they inspected, 1,481 were infested with ticks.

Despite the educational efforts, many cattle growers remained skeptical about the cause of the Texas fever. Many still believed it was a matter of keeping grazing areas clean of rubbish. A Bureau of Animal Industry agent lamented, “It is easy to be seen that the carelessness or indifference of one man may counteract the work of all.”

The quarantine laws allowed for areas to be removed from the restrictions if inspectors were not able to find any ticks and thus declared the area clear of danger. This would place the area above the quarantine line, allowing them to sell their cattle without restriction and also prevent infected cattle from coming into their area. This proved an effective incentive for local ranchers to be vigilant about following established government guidelines for tick eradication. H.H. Perkins of Marion County urged his fellow cattle growers to abide by the law and to work to get rid of ticks in the county. “Think of what this would be worth to the cattle owners of Marion county [sic], not only in the freedom of our access to market, but in protection against infected cattle being driven into the county from the south as has been done in the past, for the government would maintain a rigid quarantine against that just as it does against us taking cattle into Missouri without their undergoing inspection. Let’s get above the quarantine line,” he pleaded. Despite his urgings, the county remained under quarantine.

An early remedy for killing the ticks was to smear crude oil over the cow’s legs and sides, causing the tick to suffocate and die. Cattle growers used this method twice a week on their herds. Another method was to put a sulphur mixture on the cow.

In 1909, the state legislature passed a law to make inspections in quarantine areas mandatory. If the inspector found infected cattle or ticks on cattle, he was required to treat the animal to remove any of the ticks. Anyone who attempted to avoid having his cattle inspected was subject to a fine ranging from $25 up to $500. To pay for the eradication program, the legislature levied a tax of five cents per cow.

By 1913, three fourths of the state remained under quarantine. Inspectors continued to find cattle throughout the state infested with ticks. John Page, Commissioner of the Bureau of Animal Industry, estimated that the ongoing presence of ticks cost the state of Arkansas $2,225,000 annually. In reflecting on the loss of money to the state, he argued, “Just think of it: Enough money to buy winter shoes for all the children of Arkansas!  Enough to buy a dress for all the mothers in Arkansas!  Enough to place a Bible and a spelling book in the hands of every man, woman, and child in Arkansas!  What a toll we are paying for our neglect in not getting rid of the pest.”  His solution was to build dipping vats in all the counties of Arkansas so that every cow could be dipped in a solution called Kil-Tik to kill all the ticks in the state. Around the state, counties banded together to establish eradication districts, whereby they would pool monetary resources to pay for the erection of dipping vats around the district. This proved to be an effective means of paying for building the vats. By the end of 1914, there were 200 dipping vats in operation in Arkansas. Areas in which a vat operated witnessed a noticeable drop in the infection rate.

However, many cattle growers remained skeptical of the program. Rumors circulated that the solutions used in the vats were harmful to cattle. Skeptics claimed that dipping cattle caused them to die or greatly reduced the amount of milk given by dairy cows. J.R. Seales, a farmer in Cabot, wrote to the Arkansas Gazette claiming that the compulsory dipping laws were an undue burden on farmers who had to carry much of the cost of the eradication program. Additionally, two of his cattle had died recently, “cause unknown, but I can’t help believing the dipping is responsible.”

Often this skepticism took the form of violence as some cattle growers resisted local laws requiring them to dip their cattle. Scores of dipping vats were dynamited under the veil of darkness across the state. Three vats were destroyed in Faulkner County in the summer of 1917. That same week, someone scooped the solution out of the vat in Rosebud in White County and pitched it into the White River. A few weeks later, in Little Rock, person or persons unknown destroyed a vat just east of Forest Park.

Worried about the rise in violent opposition to dipping cattle, several cattlemen organized security guards to watch vats at night. Sometimes even this did not prevent destruction of the vats. In August 1916, in Barber, Arkansas, a small hamlet in Sebastian County, L. Pyles was entrusted to guard the local vat following the destruction of another vat earlier that month but was called away by an emergency on his farm. While he was away, P. Moore, a critic of dipping vats, quickly blew up Barber’s vat. Fort Smith law enforcement brought out bloodhounds to search for the culprit and followed a trail to Moore’s house where he was arrested. Opposition continued into 1918 when four vats were destroyed in a single night near Mena. Anti-dippers also burned down the houses of those who had been vocal in their support of the program.

In addition to the work of law enforcement to prevent damage to dipping vats, the Bureau of Animal Industry stepped up its educational work. They urged private citizens to build their own vats and dip their cattle to demonstrate to neighbors and skeptics that doing so does not harm their livestock. Additionally, farmers were concerned about the lack of funds available to both build sturdy dipping vats and purchase the dipping solution. State agriculture officials appointed W.A. Denman, a specialist in tick eradication, to travel the state visiting local businessmen with the hopes of raising the money needed to build dipping vats and purchase solution. His travels were successful. In Arkadelphia, he encouraged the Arkansas Lumber and Supply Company to furnish timber and concrete at cost for the project. Other businessmen in other parts of the state followed suit, and soon more vats sprang up across the state. In Jefferson County, several farmers created the “Dip the Tick” educational program to instruct fellow cattle raisers on how to eradicate the ticks. Even with the efforts of the private sector, money again became scarce in 1916. United States Congressman Henderson Jackoway pledged federal aid to the program.

Despite the opposition to dipping cattle, the program seemed to work. Most cattlemen took part in the program without protest and by 1921, inspectors declared the tick eradicated in half of the state. By 1928, most of the state was released from quarantine, and the cattle tick was declared officially eradicated by 1943.