Letters to Santa by Brian Irby 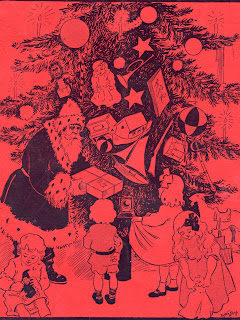 In the 1880s, many newspapers began publishing letters to Santa Claus from local children.  The idea was that the children would write to Santa about all the things they wanted for Christmas, and Santa, who happened to be a subscriber to the local paper, would bring those toys to the children on Christmas day.  The Arkansas Gazette in giving mailing information for the letters reminded children, “It is the best way for them to get him to bring them what they want.”  Newspapers across the state were flooded with letters.

Some kids were struggling with whether Santa was real or not, but wrote in anyway, just in case.  In 1896, Jack Mitchell in Little Rock, despite all the teasing he had gotten from older boys who told him Santa was not real, continued to believe in the Jolly Old Elf, “because everything I ask for you always bring it to me.”  Bessie Deshon of Little Rock had no doubt whether Santa was real or not, but worried that he might get her confused with someone else or forget who she is and make the mistake of bringing her the same thing he brought her last year.  She also gave him a choice on how to enter her house on Christmas Eve, down the chimney, through the window, or through the door, “these three are at your disposal.”  In case he decided on the chimney, Bessie promised to make sure that her dad did not have a fire in the fireplace that night. 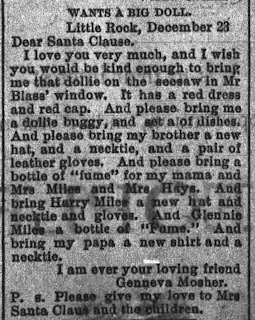 Some kids had to deal with parents who just did not understand the magic of the season.  Birdie Robinson wrote to Santa care of the Arkansas Gazette to complain about her mother not putting up a tree: “Mama says that it will make her floor dirty.”  Despite this, Birdie seemed to take after her mother’s fastidious tidiness, asking Santa for a wash tub, clothes pins, and a clothes wringer.

Alvin Roy Solomon in Helena, wrote to Santa in 1899 that if Santa brought him all that he asked for, Alvin’s father, who was a tailor, “will make you a nice overcoat to keep you warm all the winter.”

Many times, what the children wrote to ask for were questionable items.  For instance, Eddie Retchum of Little Rock wrote in 1892 that he wanted Santa to bring him a box of cigars and a diamond ring.  Eddie finished his letter with, “I seen you when you lived in Morrilton.  I did.”  Most children wanted fireworks for Christmas, including three year old Noah Young of Little Rock who wished for them in the midst of his oranges and candy in 1911.  Thad MacDonald, a five-year-old in Fort Smith, wrote in 1904 that he did not want any fireworks, since “I can get them at the store any time.” 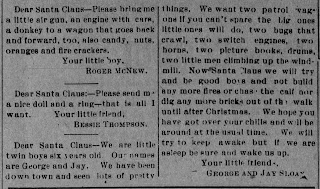 In 1900, George and Jay Sloan of Pine Bluff promised to be extra good, if only temporarily: “Now Santa Claus we will try and be good boys and not build any more fires or chase the calf nor dig any more bricks out of the walk until after Christmas.”  John Bell Duckworth promised to take a bath on Christmas day and, in order to do so, asked for two hundred feet of hose.  He did not explain why he needed such an inordinate amount of hose, but he did finish his letter by saying that he was cash strapped and asked Santa to leave him a five dollar bill.

Frank R. Timmus of Little Rock worried that his political leanings might prevent him from receiving presents.  He supported Democrat Grover Cleveland in the 1892 presidential election, but his mother told him that Santa was a Republican.  “I hope you are a good Democrat,” he wrote to Santa, “and will bring me a drum, train of cars, cannon, fire engine, bicycle, candies, fruits and nuts, and anything else you may think of.  And if you are not of our party, I hope you will think as kindly of me as you can.”

Often the letters were quite somber.  An 1896 letter from John Lawrence Fein of Little Rock recalled that the last Christmas was quite sad with the passing of his sister Agnes.  Letters from the Children’s Home orphanage were especially poignant.  A little boy named Paul wrote Santa to ask if he had any new mamas: “I want one.”

Frances Lockhart wrote to Santa in December 1917 about her father who was serving as a chaplain at Camp Pike.  “We are more lonely now than ever before,” she fretted, “because our Papa has gone to the army and we won’t have him with us any more till this war is over.”  Not only were the children asking for their fathers and mothers who had gone off to war to return, many of those soldiers also wrote to Santa asking for the same thing.  Robert G. Allen, Jr., a second lieutenant in the army wrote, “To Genial S. Claus: Please, sir, if it can conveniently be arranged, sir, Lieutenant Allen, sir, would like very much,, sir, to have a discharge, sir.”

Often the letters took on a humanitarian streak.  World War I had created a humanitarian crisis in Europe as refugees streamed across the continent in the wake of the war.  These refugees were very much on the minds of many children in Arkansas, who wrote to Santa to ask for him to help them.  Martha and Emma Lee Schen wrote in 1918 asking Santa to “visit the little Belgian children with lots of nice things.”  Erlean Wyatt of Batesville echoed Martha and Emma’s pleas: “Dear Santa, while I am happy I think of the dear little children across the waters where this terrible war is, who are so sad and to think they will not have our good Santa Claus in their homes this Christmas.”  Paulean Wyatt of Rosie, Arkansas, joined in to ask Santa to intervene for the “little children in France, Italy, Germany, Russia and all the other countries where the little children are so sad.  I wish I could help them all.”

Occasionally, new technology would creep into the letters.  The craze for listening to recorded music was reflected in the letter from Batesville’s Edna Lance, who wrote in 1920 about her love for the Victrola.  She promised Santa that if he stayed a while after delivering the presents, Edna would play some of her new Victrola records for him.

These letters are a unique snapshot of life over a century ago.  What they reveal is that kids have changed little over the past 120 years.