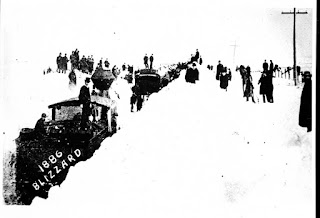 The winter of 1885-1886 was one of the worst in recorded history.  Blizzards and ice brought death and destruction throughout the country. It all began when a rare extratropical cyclone [1] developed in the northern plains of the United States in late December 1885 and early January 1886. The Great Plains experienced blizzard conditions, cattle froze to death and telegraph lines collapsed under the weight of the snow. The cyclone moved south through Texas before turning east, gaining strength as it moved into Arkansas.

The signal service monitoring the weather in the Midwest noted that the front was heading towards Arkansas and put out an announcement that snow was coming.  Traders on the floor of the cotton exchange in Memphis found the prediction laughable, and returned a message asking where the “weather clerk would get his snow.”

Despite the scoffs of the cotton traders, as the low-pressure system entered Arkansas, it dumped massive amounts of snow throughout the northern parts of the state, with the southern region seeing sleet and freezing rain.  As the cyclone tracked east, it left extreme temperatures in its wake.  On the morning of January 8, Fayetteville reported temperatures of 10 below zero.  Subzero temperatures gripped the city for the next several days.  On January 13, Fayetteville residents awoke to -16 degrees.  The editor of the Fayetteville Democrat apologized for any errors readers might find it the newspaper because, “Without being prepared for such an emergency it is impossible to work in a newspaper office with the thermometer 15 degrees below zero.”  As far south as Malvern, the morning temperature on January 10 stood at two below.  At Dardanelle, the number of hogs that died from the cold alarmed residents who feared that there would be a scarcity of meat to feed its residents.

The Arkansas River froze over throughout the state.  At Fort Smith, with the river frozen and the railroad lines blocked by heavy snow, the city was virtually cut off from the rest of the world.  In Little Rock, residents took advantage of the four-inch-thick ice covering the river to strap on ice skates and enjoy ice skating.  Boats were frozen on the banks of the river.  Those that were able to get out of the city before the great freeze found themselves moored by ice flows.

By the first of February, the temperatures began to moderate.  It seemed that the disaster had passed.  Unfortunately, this was not so.  On February 2, the snow began to fall again in Fort Smith.  By the next evening, the town was covered in 10 inches of snow, and it continued to fall.  The newly fallen snow snared trains, making travel almost impossible.  John Eberle, traveling from St. Louis to Little Rock, told reporters that “it was the worst trip he had ever experienced.”  Since snows of this magnitude were so seldom, none of the towns affected owned snowplows and railroads had few plows allocated to the region, leaving railroad lines impassible.  In Little Rock, streetcar lines were also impassible.  City laborers worked feverishly to clear the lines so that they could resume service.

The snow blanketed the state.  Newport reported 22 inches on the ground; Judsonia reported 24.  The telegraph wire between Pine Bluff and Hot Springs collapsed.  Merchants in farm towns could not receive their daily market reports from cotton and produce exchanges.

Luckily, the temperatures accompanying the new blizzard were not as extreme as they had been in January.  Although blanketed under 30-inch snow drifts, Fayetteville residents enjoyed a balmy 30-degree high temperature on February 3.

The winter storm was fierce, but some incidents suggested a lighter side.  At Harrison, which had recently allowed saloons in town, the editor of the Banner argued that the dropping of prohibition laws was the cause for the calamitous weather: “When the prohibitionists had control of affairs the weather was delightful, and now look and weep!  Ever since the saloons were licensed, we have had the worst weather that ever cursed the earth.”

In Harrison, five-year-old Jimmy Nicholson made the common mistake of sticking his tongue to a wagon wheel.  His tongue promptly froze to the wheel leaving Jimmy trapped.  Luckily, his mother spotted the boy in his predicament and came and saved him, but afterward he “has been suffering with a very sore mouth ever since.”

Former governor Powell Clayton had ordered 14 tons of ice from an ice packing company in Kansas for his newly opened Crescent Hotel in Eureka Springs.  Unfortunately for the former governor, the telegraph operator mistakenly entered the request as 14 carloads of ice.  By the time the last car arrived, Clayton had 980 tons of ice on his hands.  With temperatures hovering around freezing, the Arkansas Gazette reported that “the governor will have ice enough to supply the whole city for a while at least.”

But not all was levity.  Several houses and businesses were destroyed by the severe weight of the snow.  In Charleston, the heavy snow collapsed a mill house, killing 14-year-old Louis Weaver.  E.W. King of Rector, Arkansas, was enjoying breakfast with his family when his house’s snow-laden roof caved in.  Although King was able to escape with his family, his home was destroyed.

As temperatures continued to warm, the drifts subsided and the crisis began to pass; melt off was a little higher than usual but in the main, life returned to normal.  By the end of February, people were starting to talk of spring and planting new crops.  What had been one of the worst winters in Arkansans’ memory began to fade, itself becoming a memory.

[1] Although the term is often used to refer to a tornado or waterspout, “cyclone” is also a general term for a weather system in which winds rotate inwardly to an area of low atmospheric pressure.  In the Northern hemisphere, the circulation pattern is in a counterclockwise direction. Extratropical cyclones are low-pressure systems that form outside of the tropics in response to a chronic instability of the westerly winds. Concentrated regions of temperature change known as fronts characterize extratropical cyclones.