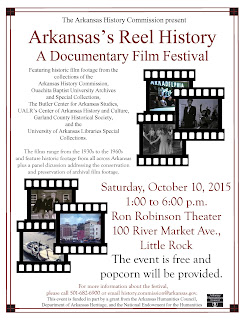 The Arkansas History Commission and State Archives in collaboration with five other Arkansas agencies will be showing a series of rarely seen historic films on Saturday, Oct. 10, 2015, from 1 – 6 p.m., at the Ron Robinson Theater at 100 River Market Ave., in Little Rock.

Dates range from the 1930s through the 1960s and include historic footage from Dunbar High School in the 1940s, Nashville, Arkansas in the 1950s, annual OBU/Henderson State football games and parades in the 1940s, Arkansas politics, the1953 Little Rock Christmas parade, the Buffalo River in the 1960s, folklorist Mary Parler scouring the Ozarks for folk songs, and Hot Springs in the 1930s and 1940s.

There will be a panel discussion at the end of the day addressing the conservation and preservation of archival film footage in personal collections.  “This is a new genre of event for the Arkansas History Commission,” said Dr. Lisa K. Speer, Director.  “We are excited to be collaborating with other Arkansas archives to present this film festival during Archives Month to promote the importance of preserving film and moving images before it’s too late.”

The event is free and popcorn will be provided!

For more information about the symposium, please call 501-682-6900 or email history.commission@arkansas.gov.

This event is funded in part by a grant from the Arkansas Humanities Council, the Department of Arkansas Heritage, and the National Endowment for the Humanities.

Posted by Arkansas State Archives at 9:57 AM