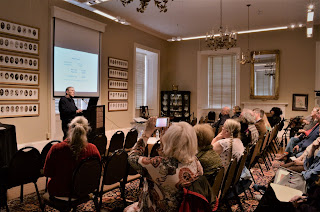 About 40 people gathered on a recent Saturday at the MacArthur Museum of Arkansas Military History in Little Rock to hear what life was like in Territorial Arkansas.

“Our annual symposium focused on the history of Territorial Arkansas because we are celebrating the 200th anniversary of the territory this year,” said Julienne Crawford, interim Arkansas State Archives director. “Arkansas possess a rich trove of history, stories and characters who lived in or passed through what was the Territory of Arkansas. This early history of our state laid the foundation for the collective identity and heritage that makes us Arkansans.”

During the symposium, “1819-1836: The History of Territorial Arkansas,” attendees heard from Theo Witsell, chief of research and inventory of the Arkansas Natural Heritage Commission, who discussed Thomas Nuttall’s exploration of Arkansas in 1818-1819; Dr. Charles Bolton, history professor emeritus at the University of Arkansas at Little Rock, who presented “Federal Aid and the Infrastructure of Arkansas Territory;” Callie Williams, education outreach coordinator with the Arkansas Historic Preservation Program, who talked about Territorial-era buildings; and Gary Pinkerton, an author and historian from Houston, Texas, who spoke about Trammel’s Trace. Attendees also got a glimpse of the ASA’s new traveling exhibit, “Territorial Arkansas: The Wild Western Frontier.”

“The information about the limited transportation available makes you stop and think about how much of the ancestors’ time had to be spent just moving things out of the way – like huge tree stumps in rivers or forests,” said Jeanne Rollberg, an associate journalism professor, genealogy specialist and a member of the Friends of the Arkansas State Archives. “It was also impressive to learn about the funding issues from federal and local levels to try to help the state progress so it could attract more residents.”

Territorial Arkansas was created in 1819, but it was difficult to get to the area or to transport goods. The territory relied on rivers and struggled to build roads before becoming the state of Arkansas in 1836. Roads remained troublesome even as railroads took over, but at least one footpath eventually became a major throughway for people moving to Texas.

The symposium was among several events the Arkansas State Archives held as part of Arkansas Archives Month in October. National Archives Month is meant to raise awareness of the work archives and archivists do.

Crawford said the symposium helped spotlight an important part of Arkansas history and showcased the Arkansas State Archives’ mission to preserve and make available historical artifacts and records.
Rollberg agreed. “Seminars like this one get people very interested in Arkansas history so that they will come to the Arkansas State Archives and enjoy all the wonderful collections the state has built there through the years,” she said.