This is the first in a two part story about Jack the Shooter.  The second part will appear in next month’s newsletter. 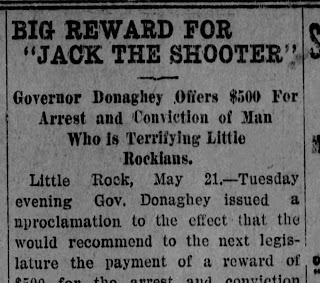 Few things make the blood run colder than the mention of a serial killer. One of the most well-known serial killers was the never-identified, never-apprehended murderer and mutilator of 1880s London who identified himself as “Jack,” better known as Jack the Ripper. Twenty-one years after his crimes seemed to stop, Little Rock experienced a rash of attacks. The community dubbed the attacker “Jack the Shooter,” a seeming homage to the earlier serial criminal, even though the moniker wasn’t a perfect parallel. For one, the Little Rock “Jack” was only modestly homicidal: He seems to have to only murdered one person. Also, despite being called “the Shooter,” it seems that he was a ridiculously bad shot: Shooting at close range, he was usually able to miss his target. However, his series of assaults on citizens over the space of several months in the spring and summer of 1912 threw the city into a frenzy.

The attacks began on April 14, 1912. At his house in Little Rock, C.R. Smith was sound asleep in bed with his wife. At around 1:30 in the morning, an intruder crept in through the bedroom window. He woke the couple, knocked Mr. Smith down and then attacked Mrs. Smith before leaping through the window and running off into the darkness. Puzzled, police had no suspects and soon forgot the case of an average nighttime break-in.

On May 4, Police Capt. T.M. Clifton was patrolling at three in the morning on Spring Street when he noticed a man talking to a woman through a window in a nearby house. Suspicious, Clifton ducked behind a pile of logs and listened to their conversation. From the conversation, Clifton believed the man was a resident of the house and was leaving for work. Clifton left his hiding spot and approached the man, ordering him to move on, at which point the man pulled out a revolver and shot at the officer. Luckily for Clifton, the shot missed him; the mysterious man fled down Spring Street, leaping over fences with the officer on his trail. The assailant maneuvered through the streets with ease and escaped.

Victims often agreed on Jack’s appearance. He was dark complected, often wearing what was described as a floppy hat and a mohair suit. He also seemed to wear disguises during his attacks. His weapon of choice was a .32 caliber pistol. Reports suggested that he was fond of women’s perfume, apparently dousing his clothes with scent before an attack.

On May 6, at around 4 in the morning, the prowler crept into the house of O.E. West on Thirteenth Street. Inside, he startled West’s daughter. When she screamed in alarm, he shot at her, inflicting a superficial flesh wound, then leaped out of the window and fled.

Twenty minutes later, the attacker broke into the Douglas residence on Rock Street. Mrs. Douglas awoke to see the man walking down her hallway. She screamed, and “Jack the Shooter” shot at her, again missing his target. He rapidly retreated from the house.

Minutes later, H.B. Sloan on Thirteenth Street awoke to the smell of smoke. He rushed out of the house to find his back porch on fire. Clifton accompanied the fire engine to the scene of the fire. He quickly concluded, based on evidence that was not shared with the press, that the arsonist was the same man who had terrorized the city over the last several nights.

The next morning, May 7, a trespasser attacked 14-year-old Virginia Howell in her bedroom. The assailant locked the door to keep the frantic parents out. When her father was able to kick in the door, the attacker fled through a window. 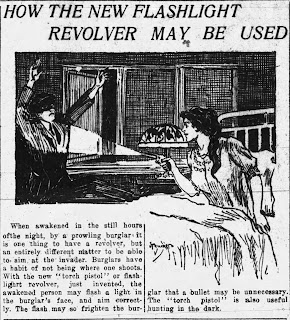 The rash of break-ins and shootings caused panic throughout the city of Little Rock. Police officers stepped up their nightly patrols. An informant told them about a young man, L.H. Keeling, who had arrived in town to work on paving Little Rock’s streets. Suspicious, detectives put the young man under surveillance. On the evening of May 12, Constable Charles Jones received a complaint claiming that there was a man who was accosting passers on Second Street, claiming to be an officer of the law. Law enforcement arrived to find Keeling. In his possession was a .32 caliber pistol. He was also dressed much like the attacker as described by his victims, wearing a dark mohair suit and the same type of hat.

After briefly questioning him and charging him with impersonating an officer, the officers took him to the home of C.R. Smith, the victims of the April 14th attack. Smith identified Keeling as the person who attacked him and his wife. Further, Smith’s mother-in-law, Hattie Burke, claimed to have heard the attacker that night and identified Keeling’s voice as that of the attacker. The next morning, Virginia Howell came to the jail to identify the shooter. She said Keeling resembled her assailant, but she could not be certain. Keeling’s response to the charges was that he had been in Benton, in neighboring Saline County, at the time of most of the break-ins. The police checked into his alibi, found that it was true and released him. The Smiths, when confronted with the fact that Keeling was not in town on the morning of the attack, retracted their stories.

Law enforcement wondered if older unsolved cases could be attributed to “Jack the Shooter.” In one instance, Penelope Temple Parker came forward to tell police that she was attacked by a man she knew on Feb. 4. At the time of her attack, she said she feared that her attacker would return and kill her. Months later, Parker decided that her attacker was likely Jack the Shooter. She told detectives that his name was Lawrence Redcliffe, a nurse at the Hotel Marion who had earlier boarded at the Parker house. She claimed that Redcliffe entered her room at 1 a.m. where she and her daughter Junie Jamison were sleeping. Jamison woke up first and screamed, awakening Parker. The two women fought the villain. He produced a knife and slashed Parker across the cheek and hit her over the head with his revolver. He then escaped through the window.

Based on Parker’s testimony, Sheriff Norman Beller arrested Redcliffe. Redcliffe had a long arrest record.  Most recently, he had been charged with perjury for lying in order to get to serve on a jury. It was also learned during the investigation that he had kidnapped his son from his estranged wife. Nevertheless, the spotlight quickly turned elsewhere when, on May 15, the attacks resumed while Redcliffe sat in a jail cell. On that date, a prowler broke into the bedroom of one Amy Campbell, who was living in a boarding house on Spring Street. Campbell saw the man entering into her bedroom and, just as she was about to scream, the intruder shouted for her to not make a sound “or you will hear from this,” indicating the pistol he pointed at her. He stole about three dollars from her purse, then dumped the contents of a perfume bottle onto his clothes and exited the room the same way he came in.

This latest attack baffled detectives who began to wonder if there was not just one “Jack the Shooter” but multiple men who were prowling the city in the early morning hours. The city remained quiet for a few days after Redcliffe’s arrest. On the morning of Sunday, May 19, however, an intruder crept into the bedroom of D.P. Coulter on Rock Street. Also in the room were Coulter’s wife, their nine-month-old son and 15-year-old Marion Smith, who the Coulters had hired to care for their child. Coulter awoke to the sounds of gunfire and, then, a man fleeing the bedroom through a window. Tragically, Coulter discovered that his son, who had been lying next to him, was dead from two gunshots to the heart. The violence had escalated; “Jack the Shooter” had finally killed someone.

In Part II: With the murder of a child, Little Rock’s unease turns into full-fledged panic and suspects emerge. Look for the conclusion to this story in next month’s newsletter!