Arkansas is a supernaturally rich state, one with many legendary ghosts and mysteries. After the long, hot summer months, when the air turns cool and there is a bit of a chill snap in the evening,  people around the state gather by fireplaces or around campfires under the stars and retell these tales. One is the mysterious disappearing hitchhiker on Woodson Lateral Road; another is the ghost of a beheaded railroad worker who haunts a set of abandoned railroad tracks in Gurdon. The spirits of cancer patients who died at the hands of a quack doctor at the Crescent Hotel in Eureka Springs form a ghostly legion of their own.  And for every well-known ghost tale there are others, once known in their locales but which have faded from memory over the years. A search through the newspaper holdings at the Arkansas State Archives, however, can yield many of these obscure ghost stories. 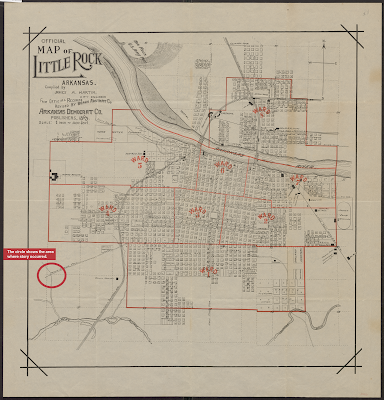 For instance, there is the strange story of a haunting that occurred in the 1870s in the Rock Creek area of Little Rock.  According to surviving newspaper accounts, Capt. Dan O’Leary, contractor of a project to extend the turnpike into the Rock Creek area in southern Little Rock, was witness to the ghost. In February 1888, O’Leary made his camp on the end of the unfinished road.  His fellow workers were encamped along Rock Creek. As the construction commenced, every morning O’Leary’s employees told him stories of strange noises they heard during the night.  These noises continued during the construction project.

O’Leary initially dismissed the stories, believing that the men were simply “hearing things.” On the other hand, he knew the area had been the scene of a grisly murder several years before, one that had been sensational enough so that O’Leary remembered it clearly, even 15 years later. The Richardson family had traveled from Missouri and were on their way to Texas. On a chilly evening in November 1873, Mr. Richardson, his wife and daughter camped on the banks of Rock Creek just south of Little Rock. As the family slept a man crept up and murdered the family, stealing their horse and wagon and then disappearing into the woods. The next day, the bodies were found.

Investigators located the stolen horse and wagon in the possession of one Charles Matlock. After his arrest, detectives asked where he had obtained the property. Matlock told police detectives that he had bought them in Texas and had been on the way home to Little Rock when he was arrested. After a two-week trial, a jury found Matlock guilty of murder and sentenced him to hang. Matlock maintained that he was innocent of the crime to his dying day. He was hanged on June 19, 1874.

O’Leary decided that perhaps his employees might be telling the truth. There was no other way to investigate but to stay up and listen for the sounds that his work crew had been reporting for weeks. The night began peacefully, with only the roar of the nearby creek breaking the silence. As time passed and nothing happened, O’Leary began to think that there was nothing to his men’s claims. Around 11 p.m., O’Leary decided to call it a night, deciding his crew had obviously mistaken common night sounds for ghosts. As he laid his head down in his bedroll, however, he heard a sudden sound: a woman’s scream.  The scream repeated a few times, then all fell silent. Then, O’Leary heard the distinctive sound of a child begging, “Don’t kill mamma!  Don’t kill mamma!” repeatedly. The voice faded with each plea until silence returned to the valley. O’Leary slipped out of his bedroll and started walking in the direction of where he had heard the sounds. Venturing toward the creek bank, he found … nothing but the rushing waters.

After O’Leary’s experience became widely known, J.M. Lowrey, a teamster who often hauled lumber into the city, reported that he had often heard those same sounds while camping in that area. Eventually, the mysterious noises had caused him to choose a different spot on which to camp if he was in the area.  Reinforced by Lowrey’s story, interest in “the Rock Creek haunting” increased. In the spring of 1889, several prominent people in Little Rock society, including a county judge, decided that they might camp in the area and see if they could also hear the mysterious sounds. At around 10 p.m. Tuesday, April 9, the party heard screaming, coming from the surrounding woods. Overcoming their fright, the group decided to investigate further. As they tromped through the brambles in the direction of the creek, they found a wild cat to be the source of the scream and quickly killed it. They heard nothing further that evening. O’Leary’s crew finally finished the project, leaving behind Rock Creek and its mysterious sounds. Eventually, the story faded and was forgotten.

Another forgotten story is that of the mysterious black-clad figure that caused an uproar in Jackson County. Witnesses began reporting the strange figure wandering the streets of Newport in October 1878. Witnesses described the ghost as resembling a portly woman wearing a black veil. She usually made her appearances around 9 p.m. One witness reported that while he was walking from Jacksonport (the county seat, located five miles north of town) to Newport along the railroad tracks, the mysterious woman came up behind him. Thinking the woman was no more than an ordinary traveler, the man greeted the woman. Instead of returning his greeting, she jumped up several feet in the air onto a telegraph wire and then started walking on the wire, keeping pace with the man as he walked.  Then the woman vanished. The ghost was also spotted near Newport’s post office. As the sightings increased, Newport’s streets became increasingly deserted after dark. Eventually, the ghost scare in Newport died down after the mysterious female made fewer and fewer appearances and eventually disappeared entirely.

She was not, however, finished with her nightly strolls. Two years later, on Sept. 26, 1891, a group of people were enjoying an early autumn evening on their front porches in Jacksonport when they spotted the mysterious woman, dressed in a black veil with long black hair, walking down the middle of the street. When citizens attempted to talk to her, she suddenly fled from the area. For the next several weeks, she continued making nightly visits through downtown Jacksonport, frightening all who saw her. Alarmed about the woman in black, several of Jacksonport’s citizens decided to arm themselves and lie in wait for her. Luckily for the black-clad specter, the armed vigilantes never caught sight of her.

Many speculated that she was not a ghost at all, but instead was a clever scheme by robbers to scare citizens to keep them off the street and leave the local shops vulnerable to robbery. Others saw the lady in black’s appearances in 1891 as a political scheme to sway the election over whether Newport should become the new county seat of Jackson County. This theory held that the supposedly spectral appearances would so frighten people that they would be reluctant to go to Jacksonport to the courthouse, since the town seemed to be haunted. According to the theory, people would vote for Newport merely to keep from having to go to haunted Jacksonport. Whether it was an actual ghost, a political ploy by Newport supporters or a clever scheme to aid robbers, the mysterious lady in black only stayed around for a couple of weeks, then disappeared again. Surviving newspapers from the era from Jackson County do not mention another appearance from her.

Arkansas’s folklore is full of strange stories such as these. The historic material collected at the Arkansas State Archives is a great place for exploring the richness of Arkansas folklore.