Sometimes, genealogy research is a process of “two steps forward and one step back” — but for me, in 2003, deep in my quest to ferret out the truth about my third great-grandmother Millie, that one step back was more like a brick wall. In 2003, online genealogical sources were relatively new: Ancestry.com had launched in December 1998 under the name MyHeritage.com (which became Ancestry.com in November 1999), and FamilySearch.org followed in May 1999. Both featured digitized census records, International Genealogical Indexes (IGI), Social Security Death Index and family trees created by members. Ancestry.com also featured some digitized newspapers and a message board for queries. Both services were interesting and useful, but what they offered was not enough to help me unlock the mystery that was Millie. That year, work and my living family were my highest priorities: My nephew Michael, born in 2002, and my mom, who was fighting cancer, became the center of my attention. For the time being, finding the answers about the much-married Millie, her husbands and her children could wait.

As it turned out, however, the wait was not all that long. In July 2005, I attended the Deshields family reunion, held at the Jones Center for Families in Springdale, Arkansas. Even though I am not descended from the Deshields family, my grandfather’s brother married one. Uncle John Wilkerson married Cuma Deshields on May 1, 1941, in Marion County, Arkansas. They spent most of their married life living in Bentonville, Arkansas. Therefore, the reunion was open to connecting families from the East Sugar Loaf and Lead Hill area in Boone County, Arkansas. My parents, my brother’s family and I went to see everyone and introduce young Michael to this crazy clan. The reunion turned out to be the last time I would be around my grandfather Wilkerson’s sisters, my great aunts Olivet, Lillian and Mary Alice. It was a long day of talking and playing “tackle Aunt Jane” with my nephew and my Cousin Becky’s children, Andy and Jennifer. However, “Aunt Jane” did get some time to talk to the grownups. As a good genealogist, I attended the reunion with notebooks filled with all my research. My plan was to find the perfect time to approach my great aunts and bring up what I thought would be the sensitive subject of their great grandmother, Millie. 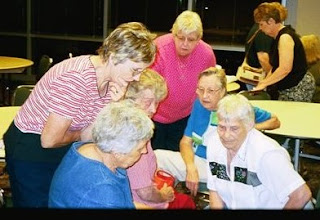 The time came as the day slowed down and families began to leave. My father dragged me over to the congregation of my aunts in the middle of the room. We ended standing by Aunt Olivet. [1] Dad started the conversation telling her I had questions about the Millers. I discussed with her my research on the Miller family, hoping it would possibly jar something from her memory or those of her sisters Lillian or Mary Alice. When I mentioned the name of Prather and that an O. George Miller was on the census with his family in 1870, Olivet said, “Well a Prather raised George.”

I shot, I scored: Here was confirmation that I might be on the right track. Olivet went on to confirm that “Yes, Millie did marry him” and that her grandmother, Millie’s daughter-in-law Laura Miller, did not like her. Aunt Olivet told me Laura had been close to Prather’s wife, whom he left in order to take up with Millie! Also, I found out that Millie had encouraged her son George to come to Kansas and work in the lead and zinc mines there. Laura had told him that if he went, she would not be following him.

After the reunion, it was clear that my research needed to be continued over in Kansas, but getting there proved to be an issue. Reader, I’ll bet you are thinking something along the lines of “Kansas is not that far away — so why not just go there?” The answer lay in prioritization: there were other, more pressing, things with which I dealt. I still had work — a paying job, and in history, to boot —  and family. My mother was still battling the dreaded “C” word and, to make things just a little more complicated, I started graduate school in 2006. Therefore, I reasoned, Millie could, and would, wait until another day.[2]

In 2007, Mom lost her battle with cancer, and it took everything for me to finish graduate school. My dad, who was a great support, kept me focused and I kept working at the Arkansas History Commission and, in 2009, finished my master’s degree. After this, you might imagine I would have time and energy to refresh Minnie’s cold trail; after all, working at the commission, I was assisting and learning from experienced and enthusiastic family historians on a daily basis, and enjoyed access to one of the best genealogical collections in the region. But remember what they say about plumbers’ houses; they’re the last ones to get running water! I was working in genealogy, but my own personal genealogy had to go on the back burner … and for a while, my enthusiasm cooled off.

With time, though, my passion slowly came back. In 2015, I dusted off my old notebooks and began going through my research. In 2017, I decided to focus on picking up Minnie’s trail where I had left it, vowing to myself that “this was it.” My nephew Michael was getting older, after all, and he now had two sisters, Amanda and Kayla; I wanted to be able to tell them the whole family story, including the tale of the mysterious Millie. So, I started poring through things I’d previously collected. I found where I had found a “Millie Miller” living with one William Liner in Labette County, Kansas. She had been born in Tennessee, and William was a teamster. Early on I had suspected a connection but could not find documentation. A family rumor had identified “my” Millie as having worked as a cook on wagon trains hauling between northwest Arkansas and Kansas, so living and keeping house with a teamster would certainly fit what I knew about her. Another possible lead was a certain Millie Tyner who appeared on the 1900 Census in Baxter Springs, Kansas. With that in mind, I decided to try to find a marriage license for Edward Sweem and Millie. Over the years, FamilySearch.org had put several states’ marriage licenses online; so my search started there. To my amazement, after several hours searching I found a marriage in Jasper County, Missouri for… E.J. Sweem and a Millie Tyner! With my heart racing, I kept reading. Their residence was listed as Baxter Springs in Cherokee County, Kansas; they were married there on Nov. 16, 1902.

After several minutes of staring at this amazing document and thinking, I realized how this made sense. Joplin, Missouri, is in Jasper County; it is on the way from Boone County to Baxter Springs. Then, I ran down the stairs of the house yelling, “Dad I found her; I found her.” He listened to what I had discovered patiently and then told me to go back to looking. The marriage license confirmed my suspicion that Millie Tyner was my ancestor. My next step was to consult the newspapers for Baxter Springs, Kansas. Luckily, Newspapers.com and Genealogy bank both had them online. Now, I could justify subscriptions to both.

What I then uncovered in the papers was an interesting story. My first discovery was in the Aug. 16, 1902, Baxter Springs News: Apparently, E.J. Sweem filed suit in district court of Cherokee County, Kansas, against Millie Sweem. The publication summons stated that he was seeking a divorce on the grounds of abandonment, extreme cruelty and gross neglect. The advertisement ran until Sept. 13, 1902. Now, according to the marriage license I found they were in fact . . . not yet married. What was going on here (or, rather, there)? Who could tell? Did I want to keep going? Of course! After hours of searching, I had not yet found proof of a first marriage, so I was not sure about why Sweem was filing for divorce from a woman who he had not yet married! Something was irregular about this; I wondered if this might have been one of the things that caused Aunt Kate, Millie’s granddaughter who originally tried to gather information about her, to suddenly stop the search.

With no definitive answer, I carried on with my quest of discovering who Millie Tyner really was. Returning to the 1880 census schedule page, I concluded that the name I had thought, years before, was “Liner” more than likely was “Tyner.” It was confirmed when I discovered a marriage license for one William Tyner and Millie Miller in Labette County, Kansas. The couple married on Sept. 12, 1881. All documents showed the couple lived a normal life; through local papers, I discovered that William had engaged in the grocery business. He ran shops in Chetopa and Baxter Springs, Kansas, from 1878 until his death in 1899. At the same time, Millie herself was working in a trade. She became known as a seamstress and weaver, skills which must have proved valuable for survival after Tyner’s death. My discoveries gave me Millie’s life between 1880 to her death in 1916, but what about before 1880? The last document — paradoxically, the earliest that I found for Millie is a Labette County, Kansas State census for 1875. In the record, it shows she was born in Tennessee and lived in Arkansas before coming to Kansas. Even better: Millie was listed along with her oldest daughter, Nancy. The only other time Nancy appeared with Millie was on the 1860 United State Census in Madison County, Arkansas. 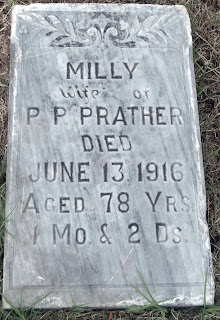 So, I now had discovered Amelia (Millie) Seals. Born to Zealeous and Elizabeth Seals on May 11, 1839, in Tennessee, she came to White County, Arkansas, before 1850. Her family then moved to War Eagle Township in Madison County, Arkansas. It was there she met her husband George Washington Miller Sr. and had four children: Nancy, Susan, James and George Washington Jr. Sometime around 1863 or after, she was widowed and forced to give at least her youngest child, George, to the family of Phillip P. Prather to raise. Millie then went on to work as a cook on a wagon train from Arkansas to Kansas. It was then she met her second husband William Tyner. In 1875 Millie made Kansas her home and married Tyner in 1881. Their marriage lasted nearly 20 years, both being respected members of the community. After Tyner’s death Millie married Edward Sweem. It was a marriage of convenience; she was to be his caretaker. Their marriage was short lived and played out in the local media. Millie’s last marriage, to the Rev. Phillip P. Prather appears to have been as loving as her first two. Millie Seals Miller Tyner Sweem Prather passed away on June 14, 1916, in Baxter Springs, Kansas, and is buried in the city cemetery.

For the time being, my research on Millie has come to a halt. The period between 1860 and 1875 remains a mystery. Was it at this time she ran, as the family folklore suggested, a brothel and saloon? Through my journey, I had discovered she worked as a cook on a wagon train. But, was she only a cook? When I showed my Gary the photograph of Millie, he told me the medal visible on Millie‘s chest had been from her “girls.” What girls? I still have questions and have resigned myself to the fact I may never know the whole story. I can conclude, though, that Millie was, above all else, a survivor in a tough world. Some mysteries remain, but I have a clearer image of who Millie was. Whether she ran a brothel like the legendary "Miss Kitty" or not, Millie was a fighter and survivor.

[1] For those who do not know me well, I was shy as a child and it still comes out at times. This was one of those times, so my dad had to encourage me.

[2] When I started seriously doing genealogy, my mom and I would discuss what we had found. She worked on her side, and I would do both hers and dads.