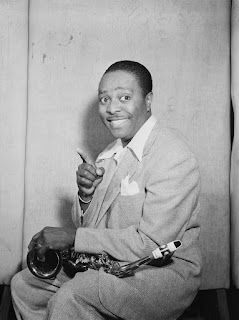 In July  1948, James Jordan sat in the wings of the Howard Theater in Washington, D.C., with a smile on his face. He had traveled all the way from Brinkley, Arkansas, for one purpose, to see his son, Louis Jordan, play his saxophone. He was no doubt proud of his son, who had been enjoying success touring the country. His records were all hits, scoring high on the Rhythm and Blues charts. Throughout the 1940’s, he had 54 hit songs on the charts, with 18 of them reaching number one.

Jordan was born in Brinkley on July 8, 1908. Soon after his birth, his mother, Adell, passed away, leaving James to raise the boy alone. As a result, the young child was very close to his father, inheriting his love of music. The elder Jordan had been an accomplished musician in his own right in Brinkley, mastering all the instruments in the big band orchestras popular at the time. Louis acknowledged his influence when a reporter asked him about his father’s talent. Jordan pointed to his father and said, “Here’s the original and I am only the imitation.”

The young Jordan took up the saxophone as his instrument of choice, playing in local bands around the Brinkley area, including his father’s band. After graduating high school, he attended Arkansas Baptist College, majoring in music. In 1936, he joined the Chick Webb Orchestra, a band which featured a teenaged Ella Fitzgerald on vocals. Between 1936 and 1938, the Chick Webb Orchestra was a staple at Harlem’s Savoy Ballroom, where they entertained intellectuals and musicians involved in the Harlem Renaissance including such luminaries as Langston Hughes and Zora Neale Hurston.

In 1938, he was ready to strike out on his own and formed the Elks Rendez-Vous Band. He later renamed his band The Tympany Five. His band was smaller than most jazz orchestras of the time. To make sure that his smaller band had the same power of a larger band, he emphasized a more syncopated rhythm, making the beat punchier. As a result, his small band could move a crowded dance floor into a frenzy. Soon, he was filling dance halls throughout the country as people were attracted to his innovative “jump blues” style of music.

Much of his success was the result of his showmanship. He bantered with his band and his audience, telling funny stories. Many of his songs had a comedy bent to them, including “Ain’t Nobody Here but Us Chickens,” and “Open the Door, Richard.”  He always sang with a smile on his face, transferring the joy he felt for the music to his audience. It was hard to watch Louis Jordan without a smile on your face. Melba Joyce, who sang with Jordan’s band in the 1960s and early 1970s, told a reporter for the New York Daily News, “He was a consummate musician, and all of his players knew it. But he also knew his audiences liked partying and having a good time.”  Music writers began referring to him as “Mister Personality.”

In 1941, Jordan recorded what would become his first big hit, a song called “Knock Me a Kiss.”  That hit was followed with a string of hits that shot him into the stratosphere of fame: “I’m Gonna Move to the Outskirts of Town,” “Five Guys Named Moe,” “Is You Is Or Is You Ain’t My Baby,” “Caldonia” and “Somebody Done Changed the Lock on My Door.”  The decade of the 1940’s was very good to Jordan. Between 1943 and 1949, around a third of the number one hits of the decade were Jordan records. His songs were at the top of the Rhythm and Blues charts for a record 113 weeks, more than any other African American artist. This feat has not been repeated by any musician since.

In 1946, he translated his musical fame to the big screen, starring in the film, Beware, a production which featured an all African American cast. In the film, Jordan portrays a successful band leader who returns to his college to put on a benefit show to save his alma mater from financial hardships. He went onto star in other film productions, including Caldonia, which featured a song in which Jordan wondered, “Caldonia, Caldonia, what makes your big head so hard?”

Despite his success, he never forgot about his hometown. When he would return to Brinkley to visit his father, Jordan was known to swoop into town driving his large white Cadillac. He would take time to buy the local children ice cream (he never drank alcohol, preferring ice cream as his vice). When he discovered that the local segregated park was off limits to black children, he bought a tract of land for a park for African American children.

Jordan’s influence on music is undeniable. Jazz great Sonny Rollins said that he was drawn to the saxophone by watching Jordan. Outside of Jazz, his influence would be even more profound. Jordan’s recording producer, Milt Gabler, realized that Jordan’s up-tempo rhythm and blues could be used to innovate other styles of music. Gabler worked with a singer from Michigan named Bill Haley, infusing Haley’s country sounds with Jordan’s jump blues. What resulted was a marriage of the two, with Bill Haley and the Comets’ “Rock Around the Clock” being credited as one of the first rock ‘n roll records. Jordan recognized his influence on what became rock ‘n roll. “The only difference between what we did originally and what became rock ‘n roll was that the beat grew,” he asserted in 1969. “Essentially the music didn’t change . . . they just put more juice behind it.”  Chuck Berry took much of his penchant for showmanship from Jordan.

However, with the dawn of rock ‘n roll, Louis Jordan’s stardom began to fade. Chuck Berry and Little Richard began replacing Jordan on the charts. He slowed down his touring schedule in 1952, leading Jet magazine to erroneously report that he had retired. In response, Jordan remarked, “I am not retired. I am taking a vacation. I have been working ten years straight without a vacation, and now I’m taking one.”  Sensing that the false news of his retirement might mark the end of his career, he quickly traveled to New York to hire new musicians for a new band and then hit the touring circuit.

By 1960, sales had slowed enough that Jordan lost his record deal with Decca Records and was hopping from small independent label to small independent label. With the decline in sales, Jordan also slowed his touring schedule. He was happy to stay home with his wife in their home in Phoenix, Arizona, but he was always open to touring. “Don’t worry,” he told Jazz writer Leonard Feather in 1961, “I’m available; but I’m very satisfied the way things are. In fact, I’ve never been happier.”

Jordan passed away of a heart attack in 1975 in Los Angeles. He was buried in the Mount Olive Cemetery in St. Louis. Upon his passing, his widow, Martha Jordan, remarked, “He was before the concept of rock ‘n roll. But everything they did had almost the same beat as Louis had. He was way before his time.”  In 1987, Jordan was inducted into the Rock and Roll Hall of Fame as an influence on the music, referring to him as “The Supreme Ruler of 1940s R&B.”