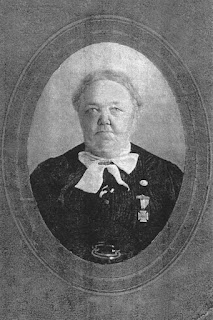 In this space last month, I began the account of my trying to straighten out the tangled web of family history, folklore and out-and-out statistics[1] that have survived concerning my great-great grandmother, Millie. Millie and her children continued to haunt me. Her son George lived --proved by the fact I am here -- but where were the rest?

Family stories from my father and grandparents indicated that George met his wife, Laura Elmore, while staying with his grandparents Oliver and Melena Blaylock Miller of Carroll County, Arkansas. With this information, I could begin looking for George and his siblings either in the household of Oliver Miller and those of any of his children. This would seem to have simplified things, but “not so fast, podnuh:” The nature of entries in the census schedules made it difficult to confirm the relationships of other residents to the head of the household. If the children were living in a male Miller’s household, particularly if they took (legally or informally) the household name, the paternity of the child could not be determined. It was possible they were there, but as I searched further in the records, it led to disappointment. Within the female homes, all children were under the husband’s surname. Therefore, I was again at a dead end.

Before long, however, Millie’s secrets slowly began to emerge … with the help of a little sheer luck in the form of a public-spirited relative.

On March 6, 2002, my cousin, Gary Risley, brought into the Arkansas History Commission a post office ledger from Marion County, Arkansas. Used for issuing domestic money orders, it records transactions from July 1, 1901 to Dec. 31, 1913. His father had managed to save the ledger from the trash during the demolishing of the old post office. It was (and remains) a wonderful and significant documentary source for the area, particularly because Marion County, like many other northern Arkansas Counties, suffers from what facetious archivists term “courthouse fire syndrome.” The ledger was to be microfilmed for preservation but before this happened, my supervisor decided that it would be good to transcribe the ledger — and assigned me the task. The reasoning behind this was that much of the penmanship in the ledger was hard to read; carefully transcribing the entries would make it possible to index the ledger, providing an “entry point’ for the document.

My knowledge of the area’s surnames proved to be valuable as I went through each page. These were “my” people, and their neighbors, and this connection kept me on task. The job took a while; progress depended on how busy we were in the research room or if more investigation was required to determine the correct spellings of names. However, it was well worth it for all the information I gathered on my family and their neighbors: I confirmed things I had already discovered and uncovered the occasional new nugget. The biggest discovery came when I reached the page for Dec. 9, 1904. On that day, G. W. (George Washington) Miller sent a money order for $5 to one “Milley Sweem” in Baxter Springs, Kansas.

“Milley”-- could it be? Was this “my” Millie? Online genealogical resources were not as rich in 2002 as they are today, but I cast my net, looking for a marriage, death certificate or an obituary for someone named Millie Sweem. In May 2002, I emailed the Cherokee County Genealogical/Historical Society in Kansas, asking if they might have any city or business directories from the area dating from around 1905. The answer was “no,” but there was something positive. In the society’s indexes, the research staff had discovered an Edward Sweem, buried in Baxter Springs, born in 1825 and died in 1906. The reply noted that there existed a marriage record, dated Jan. 18, 1908, for one Millie Sweem, age 70, to P.P. Prather of Texas, age 68. As importantly, the Cherokee County society supplied me with a death year and burial location for Millie: She died in 1916 and was buried in the Baxter Springs Cemetery.

Immediately, I ordered Millie Prather’s death certificate. When it arrived, I quickly noticed some familiar information, as well as some new points of possible confusion. Millie A. Prather had been born on May 11, 1839 in Tennessee; the year and place agreed with what I knew of “my” Millie. Her occupation was listed as “housekeeper and carpet weaver,” and her father was one Thomas Seals.

From this, my research journey led me back toward War Eagle Township in Madison County, Arkansas in search of a Thomas Seals on the 1860 census. To my horror, no person by that name was listed in the area, not even in Carroll County. From my many years in doing research I have learned that just because something is in writing, it may not be correct. Did the informant really know the name of Millie’s father? From looking at the death certificate, we know that he or she didn’t know the mother. With this in mind, I began looking at all the Seals in the area and tracing them back to the 1850 census to see if any of them had a daughter by the name of Millie. My strongest lead was an Elizabeth Seals, 43, living in War Eagle Township. She had been born in Tennessee and had been the eldest child in her household.

As I dug further and cast a wider net, I located a Zely Seals on the 1860 mortality census for Madison County; he was 54 years old and died that January of pneumonia. In 1850 though, the family was not there. Where had he or they come from? More digging revealed a certain Z. Seals, located in Marion Township in White County, Arkansas. His wife was Elizabeth, born in Tennessee, 34 years of age. Everything seemed to match, even the children’s names and ages, with one exception: Amelia age 12, born in Tennessee. Who could this young woman have been? The age and birth place was right for “my” Millie, but the name … after more reading, I solved the riddle. In modern times “Millie” is usually a short form of “Millicent” but it was also a common diminutive of … Amelia! So, Millie and Amelia were certainly the same person.

As for “Zely,” Amelia’s father’s first name was listed as “Zealous,” which could easily have been thus contracted. My hunch was later confirmed through my DNA and other descendants from Zealous’s other daughters. Was “Thomas” his middle name or a familiar name, one he preferred to Zealous? At this point, it’s anyone’s guess; the census schedules can’t reveal quite everything.

From this, my research turned to Millie’s husbands; did they have a connection to Arkansas? And who, for that matter, was this Edward Sweem? Since some of the Baxter Springs, Kansas, newspapers were available online, I found a partial answer quickly… as well as another puzzlement! Edward J. Sweem, died at at the age of 80 years, 8 months and 17 days, on Jan. 25, 1906. Survivors were his daughter Mrs. Embree of Baxter Springs, and six children, but … there was no mention of a wife.

With Millie “missing in action,” the next step was to find Edward Sweem on the census records. It was a long shot, but 1900s census schedules might be my only chance to find him and Millie together. The Kansas census proved to be disappointing, but in the Arkansas schedules there was an Edward J. Sweem listed as living with his son-in-law and daughter in Harrison (Boone County). Sweem’s listed birth year, 1825, agreed with his age at time of death in 1906, so this counted as a strong lead.

My next step was to turn to the mysterious Texan, P.P. Prather. As I stated earlier, he and Millie married in 1908. According to the U.S. Census and the Kansas state census records, the couple lived in Baxter Springs until Millie’s death. In fact, according to her obituary, printed in the Baxter Springs News, Mr. Prather had found her on the morning of June 14, 1916 in bed, where she had passed away peacefully. Sometime after her death, he moved to Harrison, Arkansas; this is documented by his appearance in the 1920 Census schedules from there, which indicated his residence in the County Home. Prather died in the home on March 3, 1924. When I checked the Harrison Daily Times for an obituary, not only did they run one, it contained a surprise: P.P. Prather was, in fact, the Rev. Prather, a minister in the Christian church, ordained on Feb. 25, 1894. Thus, I had one hypothesis proved out: Both Prather and Sweem had a documentable Boone County connection.

My search for Prather continued. Although he had been described as being from Texas, he had lived in Dodd City Township in Marion County, Arkansas before his marriage to Millie. In 1894, he married one Malissa Stonecipher in the same county. Going back one step on the Census, I discovered he was there in 1880. This census gave me his first name (Philip) and that of his first wife (Sarah). The trail then went to Missouri, where their daughter was born in 1869. I found them through the 1870 Census, living in Cullen Township in Pulaski County, Missouri. As I looked at the listed household names, the last was a surprise: living with the Prathers was a young man by the name of O. George Miller. Keep in mind that my ancestor, Millie’s son, was known as George Washington Miller. The young man living with the Prathers was of about the right age for “my” George, but that pesky “O” didn’t fit. I wanted this George to be Millie’s (and “my”) George, but I could not, at that point, prove it.

My research thus again hit a brick wall. Would I ever discover the truth? My questions of “who, what and even where” concerning the mysterious and much-married Millie Miller still lingered. Now I had another question as well: Who was the George Miller living with P.P. Prather? I had discovered intriguing bits about my forebears, but with every discovery, it seemed, a new question or two had popped up. I was chest-deep in my family’s history and the water was still rising.

[1] “Figures often beguile me, particularly when I have the arranging of them myself; in which case the remark attributed to Disraeli would often apply with justice and force: 'There are three kinds of lies: lies, damned lies, and statistics.” Mark Twain, Chapters from my Autobiography (1907)