What does one look for in an archive?

Historians and researchers use archives to find first-hand accounts and records, like early Arkansas statehood correspondence between lawyers, complete with land deeds, that show ownership of the land that would one day become Little Rock.

Genealogists rely on census records and military enlistment records to trace their heritage.

Archives even play a lesser known – but no less important – role in helping former National Guardsmen apply for military benefits or for family members to get funeral honors or gravestones for loved ones that served. 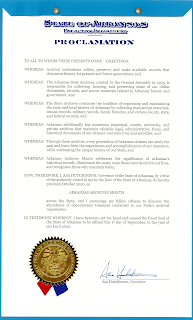 “Arkansas Archives Month celebrates the significance of Arkansas’s historical records, illuminates the many ways these records enrich our lives, and recognizes those who maintain them,” Gov. Asa Hutchinson said in the proclamation. “I encourage my fellow citizens to discover the abundance of documentary treasures contained in our State’s archival repositories.”

The pandemic has limited capacity to host gatherings to mark the occasion, but the observation of Arkansas Archives Month can still help raise awareness of the importance of archives, the need for good records management and the work involved in the preservation and storage of the documents.

It’s also a good opportunity to bring attention to the rare and extraordinary documents preserved in archives. A case in point: The engrossed copies of Arkansas’s five (yes, five) state constitutions, each of which served as the fundamental legal document of its time (which, in the case of the last one, has stretched from 1874 to the present). Printed copies of the text of the 1874 Constitution abound, but when, several years ago, the State’s Code Revision Commission needed to confirm the precise wording of several of the Constitution’s passages, these would not serve: Commission staff examined faithful scans of the original, hand-lettered text.

“Archives are the places where the things that matter live and are kept safe,” said David Ware, state historian and director of the Arkansas State Archives. “They preserve testimony about the economic, social and political development of humankind — in short, our story. Or, rather, stories.”

The Oxford English Dictionary defines an archive as a “a collection of historical documents or records providing information about a place, institution or group of people.” These records are diverse both in sources and in formats. Examples range from the National Archives, housing the U.S. Constitution and other papers of state, to the Southwest Arkansas Regional Archives, which preserves Hempstead County court records and many other governmental, institutional and personal documents.

At the Collections Management Facility in Little Rock, the Arkansas State Archives preserves a collection for Camp Robinson, the home of the Arkansas National Guard. The collection contains National Guard enlistment records, service credits and other military paperwork beginning consistently from 1950 to 1974, with select files dating back to 1898. 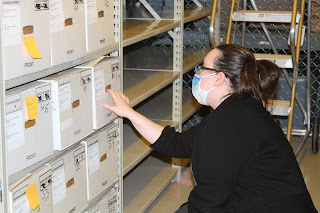 On a regular basis, Archivist Lauren Jarvis retrieves these records to help patrons document their own military service or that of relatives; often, this is a crucial step in helping former servicemen prove that they qualify for insurance or medical benefits.

“We are usually just one stopping point, so we don’t always see the beginning and the end,” Jarvis said. “But, when we get these kinds of requests, we know that they are usually more time sensitive than other research requests because they are gathering documentation that meets an immediate need. We know that we are doing something that is important and essential.”