How a White Rapist Came To Be Regarded as Black: The Lynching of Andrew Springer (Part Two)

Last month, NEARA embarked on a journey of discovering who Andrew Springer was -- the only man to be ever lynched in Lawrence County for the crime of rape – and why this white rapist was "remembered” as Black. Click here to read the first part of the story. 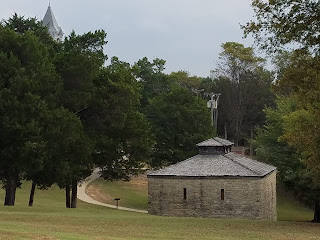 Who was Andrew Springer and how did he commit the crime for which he was ultimately lynched? As widespread as the coverage of Springer’s crime and lynching was – newspapers from Pennsylvania to South Dakota reported it – there are precious few details about Springer himself or his victim in these news reports, or outside of them. Many researchers have become intrigued by Springer over the years, including Vesta Smith of Black Rock, who first discovered hard evidence (a newspaper article) about his racial identity.21 Incomplete and inaccurate documentation has also probably helped discourage extended investigations of this case. The Encyclopedia of Arkansas has an entry on Andrew Springer,22 and he has also become the subject of ghost stories at the Powhatan State Historic Park,23 but substantial research on his case is altogether missing.

The most reliable source about Springer’s story that remains are several court documents preserved at the NEARA branch of the Arkansas State Archives in Powhatan. These documents date back to the time when the events unfolded and were produced by first-hand witnesses, including officers of the law. The documents include an order for Springer’s jailing on May 14, 1887,24 a coroner’s report, two witness testimonies and an “affidavit to county account” (i.e., a cost report).25 As important a factual record of the story as these documents are, they contain only a barebones description of what took place and do not even mentioned the rape victim by name or anything about Springer’s background. The documents neither reference Springer’s racial identity, nor provide any clues as to where he came from or what he did for a living. What the records do show is that the Powhatan jailer was ordered “to receive into to [sic] jail of Lawrence County Andrew Springer and him safely keep until discharge by due course of law[,] he having been held by me [F.M. Lee] as an examining court for trial in the Western Lawrence County Circuit Court on the charge of rape.” Sharp County Justice of the Peace F.M. Lee issued and signed the order. Sharp County was a new county at the time with no jail of its own, and a justice of the peace in those days was an officer who fulfilled the functions of a constable as well. The order was issued on the same day that Springer committed the rape: May 14, 1887.26

Another set of three documents – issued and signed by Lawrence County Coroner J.M. Barlow,  and Lawrence County Clerk C. Harvy,– provide a cost summary of the “inquisition held over the dead body of Andrew Springer,” as well as a list of jurors taking part in the inquisition. Accordingly, it cost Lawrence County $10.25 to summon and depose witnesses, to “summariz[e] … incoming claims and return … inquisition,” and to pay for “mileage going & returning.” A jury of 12 members separately cost the county $1 each, for a total of $12.00, while two witnesses commanded a$1 (0.50 cents each). The expenses for the coffin and burial of Springer’s body amounted to $10.00.27

The inquisition took place on May 21, 1887, in Powhatan, the same day Springer was lynched. The inquisition report simply states: “Upon the view of the dead body of Andrew Springer by the oaths of Fill Wayland, W.S. Watson, F.C Stuart, Wm [William] Matthews, Jno. [John] W. Martin, J.R. Wells, W.D. Ragsdale, J.H. Doyle, H.F. Sloan, J.R. Eudaily, A.J. Hedrick, John Darter, good and lawful jurors of said County who being in due form sworn said that the said Andrew Springer came to his death by hanging and pistol shot by parties unknown to the jury about one o’clock this morning.”28 In other words, the jury of  “good and lawful” citizens examined Springer’s body and testified that he died as a result of being hanged and then shot around 1 a.m. Saturday by a party of men, none of whom were allegedly known to any members of the jury.

It is beyond unlikely that not a single juror knew any of the “20 to 25 men” that snatched Springer from the Powhatan Jail and lynched him a short distance away, even though they were not trying to hide their identity by wearing masks, for example (according to Angle’s testimony below). It is also not hard to imagine that, in the case of rape, jurors would have been reluctant to tell on anyone who partook in the lynching of a “rapist.” Indeed, it was expected of “good and lawful” citizens to dispense a Judge Lynch-style justice to any rapist, rather than allow the rule of law to play out. Several newspapers covering Springer’s case reported as much: “[P]redictions that Judge Lynch would settle the case were freely made [in the community regarding Springer].”29 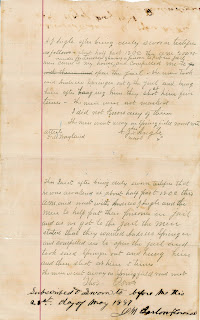 Only two recorded witnesses testified as to Andrew Springer’s final hours: Lawrence County Jailer Andrew J. Angle and Thomas Parrott, status undetermined, but apparently someone who helped the jailer. Angle’s statement is brief and unrevealing, not at all what would behoove the testimony of the most vital witness in the case. After all, Angle had custody of Springer and witnessed the mob law being leveled against him. Even drier than the most laconic newspaper account of the case, Angle simply stated:

jail. The men took said Andrew Springer out of jail and hung him. After hanging him they shot at him five times. The men were not masked. I did not know any of them. The men went away on Springfield road west [toward Sharp County] [emphasis added].30

Whereas Angle’s testimony is recorded in the first person singular (“I”), possibly written by the witness himself,  Parrott’s account of events appears to have been put to paper by someone else (it starts in the third person singular/plural, “he/they”), likely indicating that Parrott was illiterate. Both witnesses gave statements the same day that Springer was lynched – May 21, 1887. Parrot essentially repeated the same things Angle said:

[H]e was awakened at about half past 12 oc [o’clock] this a.m. and went with Andrew J. Angle and the men to help put their prisoner in jail and as we got to the jail the men stated that they wanted Andrew Springer and compelled us to open the jail and took said Springer out and hung him and then shot at him 5 times. The men went away on Springfield road west.

A list of sordid details that are missing in Angle and Parrott’s accounts are supplied by newspaper descriptions, some more detailed than others, some simply reprinted from earlier publications. In a nutshell, the story of the rape and lynching can be summarized as follows: On May 14, 1887, a Saturday, Andrew Springer called at the home of William R. Montgomery, who lived near Opposition in Sharp County, Arkansas, to ask for a drink of water. At the time of Springer’s visit, Mrs. Montgomery was at home alone with her six-week-old baby (gender undetermined).31 Whether Springer already knew his victim and was simply on a reconnaissance mission before committing the crime may never be known, but it is certainly a distinct possibility. It is also likely that he stumbled upon an opportunity, which his twisted mind would not allow him to miss, completely by chance.

According to the Daily Arkansas Gazette of May 21, 1887, Springer received a drink of water from Mrs. Montgomery, then left, and returned sometime later to commit the rape. In this version of events, he may not have had a prior knowledge of his victim, but he saw an opportunity when he found her alone and later returned to commit the rape. As the St. Louis Globe-Democrat of May 22, 1887 put it, he “called at the house of William Montgomery, and finding Mrs. Montgomery alone in the house with a 6-week-old child, he drew a knife and threatened to kill her unless she submitted to his desires. She endeavored to escape from him by running, but he caught and overpowered her, and succeeded in his purpose.”32

The detail missing in this description, but supplied by other newspapers, is that Springer snatched Mrs. Montgomery’s infant from her arms, threw the infant to the ground, then raped and left her in “precarious condition.”33 There is no information as to what happened to the child, if anything. However, had the infant died as a result of Springer’s actions, it is my assumption that newspapers would have reported that information for a more dramatic effect of the story, if nothing else. Based on the available newspaper coverage, though, one can safely assume that the child survived the crime, and so did Mrs. Montgomery. Andrew Springer would not be so lucky.

Next month, the series concludes with a description of Springer’s lynching and death, as well as some speculations as to his background and identity.

[21] As indicated earlier, Vesta discovered the microfilm newspaper article that called Springer a “white tramp,” and she provided me with a copy of the article. However, the copy did not contain the source or date of the article. In Vesta’s memory, there are two contenders for the source, the Memphis Avalanche (or another Memphis-based newspaper) of May 18, 1887, and the Sharp County Recorder of May 19, 1887. Blake Perkins cites the Sharp County Recorder of May 18, 1887, as the source (see Footnote 3; also see Perkins’s Note 39).

Posted by Arkansas State Archives at 7:52 AM