In the 19th century, dueling was a common practice for settling quarrels or disputes, particularly ones arising from insults or slights to one’s character. If challenged to a duel, an honorable person would have to accept or risk losing his honor. Since duels were formal challenges, there were rules to be followed. Those involved would meet at a predetermined place, often outside of their territory or state in order to lessen their chances of being persecuted. At dawn, the men would stand a measured distance from each other and shoot when ordered. If the gun shots missed their targets, the men had the option to continue with a second shot or agree to end the duel. If one of the combatants managed to hit his target, it was considered that the winner of the duel had his honor completely restored.

The problem of dueling in Arkansas had been recognized as early as 1820 when the territorial legislature enacted a law prohibiting dueling. They went further than mere prohibition, however, requiring public office holders to take an oath that they had not participated in, or sent a challenge for, a duel at any time since the passage of the law. This law was later codified into state law when Arkansas gained statehood in 1836.

The law notwithstanding, some of Arkansas’s most prominent politicians in the early 1800s took part in dueling. One notable duel took place in 1827 between Henry Conway and Territorial Secretary Robert Crittenden. The men had been political rivals. Conway had defeated Crittenden’s favored candidate for Congress, Robert C. Oden. During the bitter campaign, Crittenden had considered his honor damaged, so he challenged Conway, and the two men met in Mississippi to fight the duel. Crittenden shot Conway, killing him. 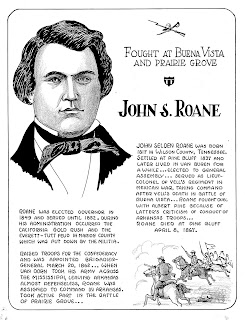 Another major duel in Arkansas history was between John S. Roane and Albert Pike. The dispute between the two men began while they were in army service during the Mexican-American War. While organizing a regiment of Arkansans to go fight in Mexico, former United States Sen. Archibald Yell was appointed colonel of the Arkansas Mounted Rifles with John Roane as lieutenant colonel and Solon Borland serving as major. Albert Pike served as captain. From the beginning, there were squabbles among the command of the unit.

Pike trained his soldiers well, but the other officers did not. Pike, observing the actions of his fellow officers’ commands, became disgruntled at the lack of discipline in their poorly trained companies. For instance, following the murder of an Arkansas soldier, Arkansans from the unit stormed a Mexican village and murdered several Mexican civilians. In reprisal, the Mexican army captured group of soldiers commanded by Borland.

Pike’s anger came to a head at the Battle of Buena Vista on Feb. 23, 1847. Yell called for the Arkansas soldiers to charge the Mexican army. The Arkansans, disorganized and confused, fell into a retreat, leaving Yell alone and vulnerable. Mexican lancers cut the colonel down, and he died on the battlefield. Disgusted, Pike wrote to the editor of the Arkansas Gazette on March 7, complaining about Roane’s leadership and the lack of discipline among his soldiers. Roane, defensively, sent a letter to the same paper stating that Pike was not involved at all in the battle. An anonymous writer countered in the Arkansas Gazette that Pike was certainly there and that his command was defending the artillery.

When the soldiers arrived back in Little Rock, Roane and Pike were still simmering over the letters. They decided to settle their dispute with a duel. Who issued the challenge is debated, but in late July 1847, the men traveled to northwest Arkansas to resolve their differences. Roane stayed at the home of Col. Elias Rector, where he spent hours practicing shooting.

On July 29, Roane and Pike met on a sandbar on the territorial side of the river. The morning was clear and balmy. Pike seemed relaxed, chomping on a cigar. The men agreed that they would fire at 10 paces. They then got into position and announced that they were ready. The first round passed without either being hit by gunfire. Roane demanded another round. This, too, resulted in neither man hitting his enemy. Either Roane or Pike (sources disagree) then called for another round, but Henry Rector, who was serving as Roane’s second, declined, arguing that the matter had been settled. Eventually, all agreed to end it at that point. The feud was now settled. They all agreed to patch up their problems, and that evening they attended a banquet together. According to Henry Rector, “Pike and Roane were afterwards friends and companions.” Such were the rules that governed dueling.

But problems were not over for Roane. When Gov. Thomas Drew chose to resign the governorship of Arkansas, the Democratic Party nominated Roane to fill the now vacant office. Almost immediately, the Whig Party opposed Roane’s nomination in favor of Cyrus W. Wilson. The main opposition to Roane was that he had participated in a duel. After all, the law prohibited those who had been involved in dueling from holding office, and the duel between Roane and Pike was not a secret. The duel had been covered feverishly by the state press. Democrats defended Roane’s nomination, arguing that Pike had been the one who issued the challenge and that Roane was honor bound to accept. Further, they argued that the law prohibiting anyone who took part in dueling from serving in elected office was not constitutional, since, the legal theory went, the legislature could not impose new qualifications upon an officeholder that was not prescribed by the state constitution. Additionally, the act did not specifically apply to the office of the governor. The editor of the Arkansas Banner argued that if the legislature could pass laws prohibiting a man from holding office on the basis of criminalities, it could certainly impose qualifications that would prevent citizens of their rights to represent the people. “They may even extend it to all immoralities,” the editor concluded, “and make it very difficult for the people of Arkansas to find a man among them qualified for governor.”

Many state Democrats began to leave the party in favor of the Whig candidate. Most of them objected to Roane’s nomination on the basis of the dueling law. Democrats in the state legislature attempted to repeal the law, but the attempt failed. Another problem was that the governor was required to state an oath that he had not participated in dueling. If Roane were to win the election, he would have to commit perjury in order to take office.

The election was held on March 14, 1849. The results took weeks to tabulate. Wilson and Roane ran neck and neck through most of the vote counting. In the end Roane won the election by 163 votes. He took the oath in April. It is not recorded whether the dueling section was in the oath or whether everyone, in typical fashion that marked 19th century politics in Arkansas, simply winked at the law and ignored it. Regardless, Roane became the fourth governor of Arkansas.